Preparing the mesh for remodeling 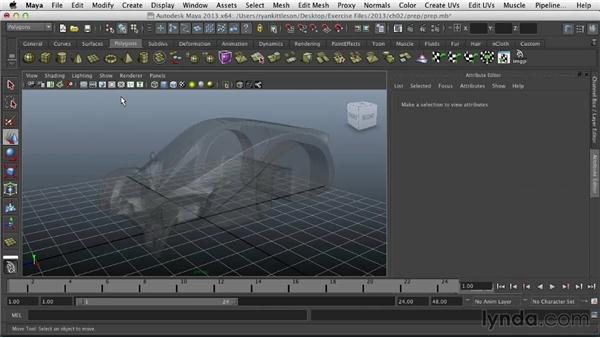 Let's open up our Hypershade. Go to Window>Rendering Editors>Hypershade. Okay. So in here, we can see the original Lambert Material, and then the Blinn that we made before. Now, let's make another Blinn. Let's go ahead and click on Blinn here, and let's edit some of its attributes. I'm just going to scoot this out of the way, so we can see our Attribute Editor over here; scoot it a little bit more. All right, let's change its name to semitransparent, just so we can keep better track of it. And now, let's go to Transparency, and just slide this up, oh, I don't know, about three- fourths of the way. All right, now, let's apply it to the model.

But, let's do it a different way than we did before. I'm going to scoot this, so that we can see the model and the material, and I'm just going to middle-click and drag from the material over to the car. All right, great! Now, let's get our Hypershade out of the way. I'm just going to close this. And let's rotate around a little bit, just to see what that looks like. So, Maya has a feature that lets you take one model and stick other models to its surface. To do this, let's select the car, and then go up to the Modify Menu, and click Make Live. Now, let's make a new polygon plane. I'm just gong to click on that. And then, let's click on the car.

So, what this did is it built that new polygon plane on our car, rather than on the grid. This is great, except for one problem. In this mode, the object that's made live has all of its edges turned green. This can be a little distracting. So, I'm going to do a little trick with display layers to fix this. So, let's make the car not live anymore. I'm going to go ahead and hit Delete, because we don't need that polygon plane anymore. Let's go up to Modify, and click Make Not Live. So now, it's a regular object again. So, let's make a display layer, so that we can easily hide this car.

Go ahead and select it. And let's go into our Channel box. Now, let's go into the Layers Menu, go ahead and click on this, and then click Create Layer from Selected. And now, let's change the name to something that makes more sense. So, I'm going to double-click on Layer 1, and let's type in something like carLive, and then click Save. So now that the car is on a display layer, we can turn it on and off by hitting this little box here with the V on it. All right, let's make another version of the car. I'm going to hit Ctrl+D to duplicate it. Now, what we're doing right now might not make a lot of sense, but it will make sense a little bit later on, so just stick with me.

Let's make a layer out of this duplicate. Again, Create Layer from Selected, and let's double-click on Layer 1, and change this name to carVisible, and click Save. So, what I have is two identical cars on two separate layers. Let's hide the carVisible for now, and let's select this carLive Layer, and select the car, and let's go up to Modify, and make it live again. All right. Now, let's switch the visibility. So, we're going to make carLive invisible, and then carVisible, well, visible. Now, we've got a live object that's hidden, and a regular object that's visible.

One more thing I want to do here is change this to Reference Mode. So, go ahead and click on the second box. And we're going to click it twice until there's an R in this box. That means it's Reference Mode. So, what this means is that the object looks regular, but you can't click on it; you can't select it. The other modes here, if you just click it one more time, that's back to normal, if the box is empty. And then, click it one more time; that is T Mode. That means it displays in wireframe only. This is also non-selectable. Let's just go back into Reference Mode. All right. Now, let's make another polygon plane.

And I'm just going to click and drag on the car. All right, let's rotate around just to see what it looks like. Great! So, it's snapping to the car that's live, but the car that's live is invisible, so its green lines don't get in the way. This is just what we want for easy modeling. Now, there is one little quirk to remember. If you save a scene with an object that's made live, then you close that scene, and load it back up again, the object will not be live anymore. You'll have to make the object live manually to continue snapping to its surface.

Video: Preparing the mesh for remodeling