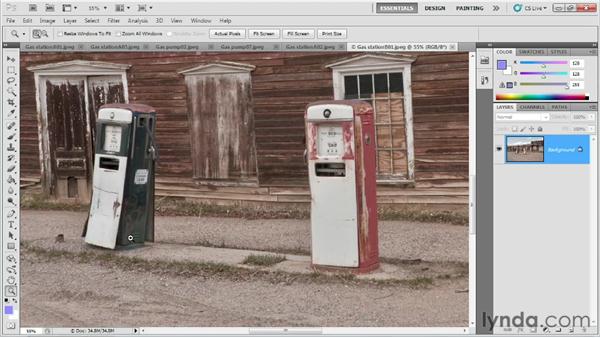 In this chapter, I'll look at modeling large props for a game environment. I'm going to model a rusty old gas pump to go with my gas station that I've modeled in my Game Environments for Maya course. I brought up the gas station reference, as well as some reference I've collected for various gas pumps in different states of repair or disrepair. I'll start out by looking at the gas station. I'll press Ctrl+0 in Photoshop to zoom extents on that image. This gas station has been around for a while and has some gently Art Deco theme styling. There's round corners in the canopy and the straight lines and long windows are horizontal, meant to evoke the feeling of speed.

We need to find a gas pump that matches, as the existing gas pumps are now missing from the island. In place, there's a bush. That gives you an indication of the age of this place and how long it's been abandoned. I've collected a gas pump reference on the Internet, and there's a number of different sites you can go to, or you can generally search. You may want to, when you're searching for reference, add in terms like "gas pump" and "rusty" or "gas pump" and "old" or "abandoned" rather than simply "gas pump." I've made sure in my reference that I've collected details, as well as pictures of the whole thing, and looked at different styles.

I've got may be more modern from the 70s here in Gas pump06, and fairly old ones here in B01. I'll start up by looking at these and see if they're going to be a good fit. These might work nicely for my station. I'll zoom in and see if they hold up. They're Art Deco in style with a waterfall side, a separate front panel, and horizontal trim. They've also got fairly intact dials, and we can see at least where the hoses and pump should go. There's one over here on this one even though it's leaning off to the side.

It's a good idea though to look at all kinds of reference and cull down what you need. This is another good candidate, especially because it says Ethyl up at the top, and the design is fitting our gas station. It's got a shoulder up at the top. This is a very Art Deco touch here, with this two-step top and long chrome band. This again might be a nice candidate, depending on what kind of reference I can find. It's also good to look at wear and tear. Even though this might be a different gas pump here, the amount of rust and general decay of this is important.

We'll need it when we paint textures. You can never have enough reference. What we really need to do then is get a bunch of reference and look it over, and really understand not only gas pumps, but how do they rust and what do they look like after they've been sitting out in the elements for a while? These are decent, although I'm missing too many pieces to really tell what's going on. I've gone through my reference, arranged it, and zoomed in on the gas pumps I think I'm going to use. What I need to figure out with a model like this is how I can economize on geometry and texturing.

Here's the big deal with large props. It's very difficult to see more than three sides at once. As you can see with the gas pumps, we can see one front and one side, and maybe something that sticks off the other side, but we can't see both sides of one gas pump. We can also barely see the top and definitely see the front, or we could probably stand way up high and see the top but not the front or side. Here's the other thing to consider. If you're dealing in props, will there be more than one? As an example, we can see two gas pumps here on this island.

It's very likely then that we can see one side and the same side next to it, so the textures need to be either a seamless match or just different enough or rotated around to make it look like they're two different pumps instead of an exact clone. However, they're manufactured to be alike, so we have some advantage there in matching geometry. What I'll plan then is for a modular texture and a modular model. I know I'm going to make this and duplicate it twice, and possibly four times, depending on if I add another island to my gas station.

A lot of times what I will do is I'll make a new layer in Photoshop, pressing Ctrl+Shift+N, and calling it anything particular, pressing B for brush. By the way, in Photoshop, it's okay to do this to your tools, and bring them up to a smaller strip on the side instead of a long strip that goes all the way down the view. My brush settings reflect what I was drawing earlier, and so I'm going to bring this back up to normal at 100%. Photoshop will keep settings for tools until you use them again or change them. Now on this layer, I'm ready to draw, and what I will do is make sure I hit Escape.

That way Normal is not highlighted. Use the bracket keys to downsize the brush and start to draw out the mesh, laying out the overall form. I know I'm going to have a mesh line here, and it's going to go up to the top and across on the chrome, and down the side here, so that's one big panel I'll need to make. My suspicion is that I want some geometry right across there to help outline the inset face. I know I'll end up with a mesh line on the side here and finally down at the base. It's okay to spend a few polygons here to get the form right.

As we can see, if I turn off this layer, it's actually very curvy. All the sides are gently curved. So we don't want to make this just a box, as it won't have that Art Deco look to match the gas station. I'm going to need to spend a few faces up on the top. I'll probably end up with some kind of geometry up here to help make this curve, and then it needs to curve across the back. Finally, I'll have some additional mesh lines running down the side. One of the things we need to plan, especially in dealing in modeling and texturing for games, is our polygon structure, and making sure that subtle curves look right without obvious facets.

A curve like this side, and yes, it is curved, will most likely have at least three or four polygons to make that curve, so when I soften the edges, it looks correct. I'm prepared to spend some polygons up here on the top, because it's a very visible piece, and I need to make sure it looks curved like the original. There is a good chance in a model like this that it's going to be subject to an edge test, and what that is is when an edge is visible against another material. As an example, I can see these gas pumps clearly against the side of the building, and that curve looks curvy.

So my model better be ready for that kind of a test, especially since my gas station, and I look back at the reference here, is white, dirty, rusty, mossy or moldy, but still white. And so if my gas pumps are shown against it, they're going to be in sharp relief. So I'm going to plan out my pieces. I'm going to model this in various elements, fronts and sides, and try to put them together so I can clone side to side and front to back. I'll try to do it in a way that my textures show up rusty but not the same rust everywhere.

I'll see if I can do this on one texture sheet and simply move around the pieces for my gas pump. I'll do this while trying to preserve the curviness and fluid design of the original, because matching the style of the props to the environment is important for the immersion in a game.

Video: Overview of modeling a large prop and planning for modular textures and models