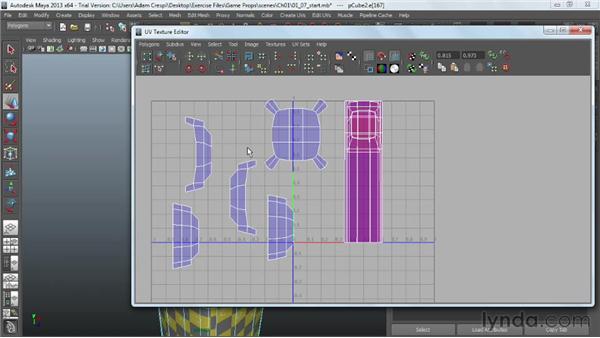 I have continued unwarapping the gas pump, and I can see I've got some obvious issues here on the top. I need to take a different approach to un-wrapping these curved top polygons. I've set it up so I've got a clean seam in my UVs here and also at the front, as we can see where the clear letters match up with the distorted ones. Rather than a planar map on the top, I need to try a different approach, and the reason is, as these polygons start to turn more and more, that planar map smashes those UVs through. It's not giving me what I want, and it's going to distort a very visible part of the gas pump.

What I'll do instead is go in and picks that shell and then try some different unwrapping. Once you've unwrapped, things are presented in UV shells in the Texture Editor. Under Edit UVs, I'll go in to my editor, and there is my shells all stacked up. What this lets me do then is use it as a selection. I'll pick the Move UV Shell tool and select that shell. That way instead of having to reselect those faces, I can grab them cleanly this way. I'll press Ctrl+F11 to convert that selection to faces. And now under Create UVs, I'll choose Automatic Mapping.

Here in my editor it's split it open a bit. I've got the sides of the top and the top itself. With some creative moving and sewing, I can probably get this back together nicely. More importantly, it eliminated a lot of the distortion. Yes, some of the pieces may be a little backwards, but the squares are predominately square. A little stretching I can accommodate, and I can probably even it out. But I can get it to a point where I can paint the rust in this very visible section and not have it terribly stretched. My one ally in this case is of course this has been outside for years, and the rust, because of water dripping down it, streaks.

Here's how I'll handle this in the Texture Editor. I'll pick my Move UV Shell tool and grab these shells and pull them out of the way. What we're seeing here is that the shells are all stacked up and because I've mapped both sides at once, some are red and some are blue. What I've also done here in my editor is to turn off the default view. What it looks like when you start up is this. Everything is in a wireframe with the image you're using as your texture shown. It makes it difficult, I think, to see your UVs. What I do then is to turn off that image and toggle on shading the faces.

This way I can see which way they're facing and grab my shells a little easier. What I'm seeing then is that the red are backwards, and I can tell they are backwards also because the letters in the viewport are backwards. I'll deal with this one later. Right now I'm going to take these pieces at the top and start to stitch them in. I'll press W for move and right-click and choose Edge. I'll start to pick some edges on my top here, and I can see the orange edge here corresponds to the orange edge there. I'm going to pick other edges on the top here.

Selecting and I can see their counterparts selected as well. And under Polygons, I'll choose Move and Sew. It's going to so those sew together, and it's actually giving me a small gap, right here, or a little bit of an overlap. I want to be careful how I'm moving and sewing, to get these in the right place. I'll undo that by pressing the Z, hold Shift and add to that selection, and select those two legs. And now I'll try a Move and Sew on them, choosing Polygons and Move and Sew.

Much better. I can stand a little bit of tear here because I can fix that, but more importantly, I can paint the rust seamlessly from the top all the way over to the side to where it needs to break at the front. Now I'll repeat the moving and sewing, picking an edge, holding Shift, and double-clicking on the rest of the edge loop. In this case I've broken that loop structure, by having that giant polygon in here and then subdividing it using the Split Polygon tool. I'll go and select these manually, holding Shift to add that selection.

Then I'll do a Move and Sew again, and get the rest of the top in. Once I've got edges selected, I can hit G to repeat last, because the Move and Sew command is repeatable. There's the top, and if I look over here in my display, it's a little more distortion-free. I've got a couple of places right here, I can see I'm stretching the A on the red, but I can fix that by scaling or moving those vertices. To fix UVs once you've got a large shell in, you can right-click and choose either Edge or Vertex and convert that selection if you need.

In our editor we can only move UVs, so I'm going to actually pick UVs and press W for move. Here in my viewport I can select UVs, and there they are, in the UV Editor. My thought is that this polygon here is much taller than it shows up over here. What I'll do then is try grabbing the four UVs next to it and pulling them slightly, and seeing where that distortion goes. And I think with a little bit of careful work, I can get some of the distortion out. I'll hold Shift and add to that selection and see if I can tug gently on these and get that shape restored.

As long as I get most of the distortion out, I will be in pretty good shape. What I may also want to do is pick the counterparts here on the other side, making sure I grab all of them, and press R for scale. I'll scale them out on the Y axis just a little bit, and those squares come back to square decently. I can do the same on the other side, getting this shell evened out and ready for laying out in this texture space.