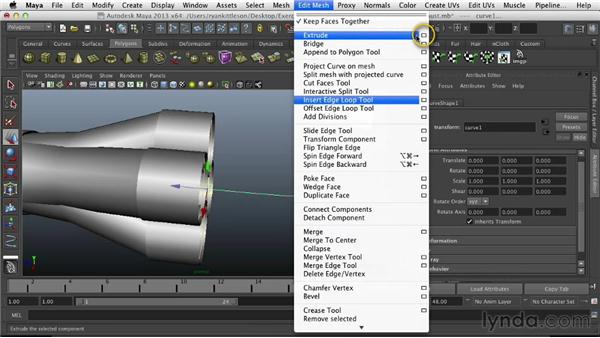 Join Ryan Kittleson for an in-depth discussion in this video Making the curved exhaust pipes, part of Modeling Vehicles in Maya.

Now to work on the bent portion of the exhaust pipes. This looks challenging because of the precise way that these four pipes bend together. Now we're going to use a new trick for this. Basically, we're going to extrude faces out and use a NURBS curve to control the shape of the extrusion. Okay. So let's go into Maya and I want to go into our top view. Let's go into the Curves Tab,and make a new EP curve. What I'm going to do is hold down X so I can snap to the grid, and I want to click twice right about here, and then I want to click twice more right out here.

Now it's going to took really messy at first, but after the curve is made, we can edit the control points. So lock it in by hitting Enter. All right! So hold down the right-mouse button to go into Control Vertex. So we've got some vertices here and they are kind of at weird angles. So we can make this a straight line if we select these vertices here and then we're just going to go into the Scale tool and then just scale them until they're all in a straight line here. Let's do the same thing with this one, scaling in the other axis. Okay, there we go! Let's just zoom in a little bit and I just to want to move this and hold down X and just move it 'till it snaps right in the middle there.

So that actually looks pretty good, this amount of straight right here. So now what we can do is actually extrude from this object and use this curve as a guide to actually bend the extrusion. So what we want to do is come in here, I am going to turn off Smooth Preview mode. I am going to come in here and select all of these open edges right here; just holding down Shift and double-clicking. And actually first, let's extrude it inwards just a little. So I'm going to go to Polygons>Extrude; and I just want to give it just a little bit of an extrusion inwards before I do this. Okay, good! With those edges selected, I just want to go into Move mode by hitting W.

So I can get out of Extrude mode. I need to get out of Edge mode. So I'm going to go into Object mode here, and notice how it still has those edges highlighted. So now, I can hold down Shift and select our curve. Let's go into the Edit Mesh menu, and go to Extrude with options. So in here, we can set several different options. One thing you definitely want to turn on is Curve Selected. So this is going to tell Extrude to use the curve that we selected. Now we also want to set the number of divisions. Now if we leave it at just 1, it's going to have just one polygon straight from the beginning right to the end, and it will be a straight line, and you won't actually see the curve at all.

So we just want to increase this. It really doesn't matter exactly how much, but something around 12 should be good enough. All right. Click Extrude. It looks pretty good. Since we extruded all four pipes at the same time on the same curve, we can be sure that they all follow the same path together. It's pretty impressive, isn't it? Now here is something cool. You can even edit the curve and the extrusion will automatically update. So I'm going to just exit out of Extrusion mode. I am going to hit W on the keyboard. Let's go in here and select our curve. I'm just going to hold down the right-mouse button, go to Control Vertex.

Let's say we want to adjust the amount of curve on here. So I'm going to hit 4 to go into Wireframe mode, and let's select these two vertices here. I am going to hit 5 to go back into Shaded mode. Now you can see if we adjust the shape of the curve, the pipes update automatically. Okay. Let's see if there's anything left to do by looking at our reference image. So you can see that there's a little bit of organic detail right here where there are some welding seams. Those kinds of things would be nice to do in a sculpting program like Mudbox or ZBrush. If you want to take it to that level, there are several courses on lynda.com that can show you how to sculpt that kind of texture.

So let's finish this up and get ready for importing in to the car scene. So I want to create a locator, and let's just make this a bit bigger. I'm going to set the Scale to something like 5 in all axes. Then, we'll just parent everything to the locator, so I just selected the locator last and hit P. So now everything is parented to the locator. Let's just name the locator now, Exhaust. Now we would want to save it. So go to File>Save Scene As, and let's go into our exercise files, our version number.

I've already got one saved out in a folder called exhaustpipes in Exhaust. So you would just save it out and then reference it into your car scene just like we did with the tires and everything else. So this technique of using a curve to guide extrusions is really useful. Imagine all the things you could make with it; tree branches, squid tentacles, cartoony hair. It's a really powerful tool. I use it all the time to make extrusions that follow a path. We also looked at ways of thinking about modeling, about breaking shapes down into simpler chunks to make it easier to model.