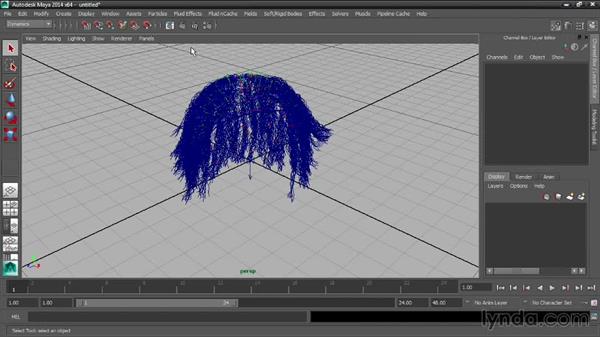 A good way to learn about in here is to load some of the examples that ship with Maya. To do that, you'll want to go into the Window menu and open the Visor. Window>General Editors>Visor. And in here you'll see a bunch of tabs, each one a different category of examples. You'll, of course, want to go to the hair examples. And to import that into the current scene, simply middle mouse drag the example into the main Maya view port. We can go ahead and close the visor now. Let's dolly forward a little bit the mouse wheel. And I can play back the simulation.

You see that the hair is actually dynamic. I'll rewind that. And I can do a test rendering. Before I do that, I just want to reduce the size of the render window a bit so that it will render more quickly. I'll go into the Render setup. Dialog, scroll down in that Common tab, turn on Maintain Width/Height Ratio, and just set the width down to 640 pixels and press the Tab key. Now I've got a smaller area for the rendering which will, of course, render more quickly. Close the Render Settings window. And go ahead and click the Render the Current Frame button.

Okay, that took a few seconds to render, and now you can see it looks actually pretty good, even with default lighting. Let's close that window. And finally, to learn more about the particular hair system example you've loaded, you can look at the notes in the Attribute Editor. Select the hair and open the Attribute Editor. I'll do that with the hot key Ctrl+A. And, there are a bunch of tabs here each representing a node in the system, we'll learn about these in a moment but for now we just want to scroll over to the one that says Hair System Shape. That's the global node for this particular hair system.

Go ahead and select that to activate it. And you'll see in the notes, the developers have provided a whole bunch of helpful information to hep us understand exactly what's going on with this particular hair system example. One final note, all of the examples in the visor were developed using the classic Maya hair system, which is still available in Maya. But when you load these examples in they're automatically converted to the newer nHair system, which is what we'll be learning in this course.

1/29/2014
Get tried and true techniques for creating, styling, animating, and rendering hair with nHair in Autodesk Maya. Aaron F. Ross will show you how to prepare your mesh; control for stiffness, shape, and curl; trim and extend follicles; style hair with curves; and adjust color, translucency, and specular highlights. The last chapter shows you how to render nHair with Maya and mental ray.
Topics include: