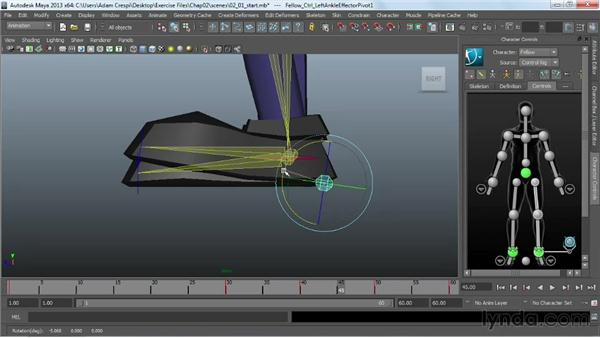 When I'm ready to animate, I've got a lot of options over what to animate in a skeleton. For example, I can pick the major controls using the HumanIK interface up on the side. I've also got controls for things like knees, pole vectors to affect knee swing. I can pull these around depending on how it needs to move and what I'm doing. I'm going to take off his keys, selecting the main root, and clicking on the timeline, clicking and dragging while holding shift to select those keys in here, and then right-clicking and choosing Delete.

Now I'm back to one key at frame one and no movement. Let's say for example I'm going to pull his wrist around a little bit, and then make him tap his feet. I'll pick his wrist, and bend it in slightly. Then I'll pull his hand down, and ignoring the head deformation let him put his arm down a little bit. We can see I've got keys at different places here. So I need to make sure when I'm deleting keys that I'm actually looking at all of them. It's a big deal. Making sure you've got the whole skeleton selected when you're adding or removing keys.

With the keys off that wrist, I've eliminated some of the motion. Now I'll scrub over here to frame 35 let's say, select that wrist, and pull it in again. I'll hit S to set the key and on 62 elements I get a key in there. I'd like to make him also tap his toes. Now what we can do in here is put on additional pivots. Right now, when I zoom in, I can see I've got a heel control and I can also select it in the GUI on the side. Rotating this makes his foot rotate reasonably, although I may want him to tap his foot from the back of his foot for example.

What I can do is on that joint, right-click and choose Create Pivot Effector. I now have what looks like an extra bone, and I don't want to move it. What I'll do is hold D or enter Edit mode to move the pivot, grab it on the Z axis and pull it back and down for example. I'll check on the side view, and there's that pivot more back at the heel. He is going to tap his foot from back of the heel here. On my GUI on the side then, it gives me an extra flyout here, showing that extra pivot. I'll click on it to turn it on and use it.

It's very possible to have multiple ones of these in a character added on. Now over here, let's say at frame 40, he is going to rotate this foot up from that point, and key it, and back down here, he will rotate down, keyed, and up again here. So now he is tapping his foot from the heel, based on that extra pivot, doing a little dance. If we look over in the Perspective View and zoom out, we can see him not only bending over but there's a little foot tap from the right place using that extra pivot.

I can turn off that extra pivot, clicking back on the joint, and now it's pivoting back on the original pivot of that IK handle. Once I've got this going in his major motion, then I can deal with things like my pole vectors on my knees. Let's say at this point, in addition to tapping his foot, he needs to move that knee a little bit side to side. I'll pull that pole vector over a little bit, or maybe up and down, and that's going to give me that control. I can pick it and even move the pivot out. These are moderately limited depending on how you move them as most of the motion is derived from the IK.

But I'll put that in and set a key. And now he has got a little knee wiggle to go with that tap. We can get an amazing range of subtlety in the animation this way, making a character bend in fluid arcs and adding in extra pivots where we need without adding in extra components to a custom rig. I can extend out the animation. The focus of this course is not necessarily on animation but more on the rig itself. But understanding where to animate it is important. This way, we can take that animation and use it and remap it to other characters if we need, or transfer it between applications.

Lastly, I'm going to look at a stance pose. What I'll do is back here at frame one define his stance. I'll define a stance pose by clicking up on the blue button. But before I do, I need to get out of body part and back to the Full Body mode. I'll drop down here and choose Edit>Controls and Stance Pose with the main root node selected. I should be able to scrub forward and return him to a stance pose with the Stance Pose button on the right side of the HumanIK interface.

This is very handy as it lets you take a mesh you may have moved around, and return him back to a stance pose, which doesn't necessarily have to be a T, although we may want to return him to a T to adjust the rig. Now when I scrub forward, he still has his animation. And I can take him to and from the stance pose without adding extra keys. I'm ready to keep animating, and I can adjust these keys in a graph editor just like any other animation, adjusting the timing and weight of his motions.

4/2/2013
Find out how to set up the HumanIK rigging system in Autodesk Maya and start creating realistic skeletons for your 3D characters. This course shows how to build the bone structure, adjust its size, and add controls. Once the skeleton is defined, author Adam Crespi shows how to animate the rig, and retarget the animation onto other characters. The course also includes an exploration of nonlinear animation using the Trax Editor, and instructions for sending the rig to MotionBuilder to map motion capture data.
Topics include: