Evolving the city's history and influences 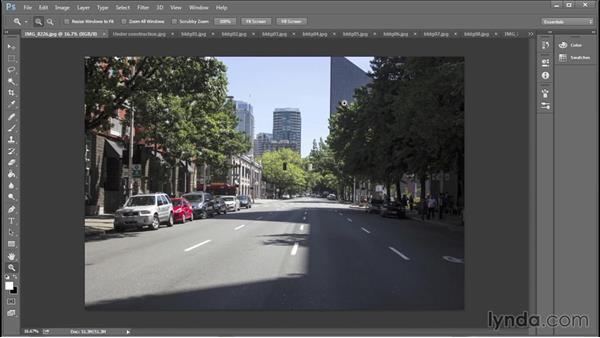 - In 3D, we can hatch a city in a few days or a matter of weeks. A bigger city might take longer but we can do it in such a ridiculously rapid rate that's just not feasible in the real world. Cities evolve over time, so it's our role as the designer to say, "How do I evolve my city, and what's gone on "as part of that evolution?". In this panorama I've stitched together, again, in Downtown Seattle, we can see on the extreme left is a fairly modern apartment or condo building.

It's got a modern, larger front on the bottom and then apartments with balconies on the next floors. Next to it, the full, older building on the left is older, we can tell it's made of stone, that the windows are smaller, there's fewer of them, we think we can see maybe just a little brick peeking up on the side, it's definitely an older structure but it's next to a gleaming glass and steel neighbor. And so again, this is a modern building. And then on the right of the image is that old, beautiful, ornate building with a credit union at the bottom.

What we can see here, then, is that this city is evolving, that is, the city started out and people built one way and then newer things came along and replaced the old. We can also see here that this city is very conscientious of it's growth, and here's how you can tell. We've got this gleaming glass and steel building between two old neighbors, but the gleaming glass and steel building right here with this concrete enclosure, references the height and scale of its neighbor.

So even though we can see clearly that the middle of the building extends up, and it's about 20 stories tall, or 30 easily, that the lower floors don't just shun the adjacent building, these height lines reference the adjacent building without overshadowing it. The same is true on the right, that again, we've got this concrete frame and some of the height lines, like the canopy right here, are a direct match for the neighbor. So is this height line, matching at the windows.

The architecture, then, references what's adjacent. We can tell, then, that one, this city has evolved, obviously there are different methods of construction. Two, it is conscious about the evolution, that it's mandated or, hopefully done voluntarily, that the architects and designers decided not to simply shun what has gone on but instead, incorporate touchstones in, and so there's a continuity in the city.

Here's another image of Downtown Seattle and again, we can see an evolution here and it's really important to spot this. What we're seeing is a main fire station, this brick and concrete building right here, it's one of the busiest in the city, and we can tell that it's an older form, we've got some newer stuff concealed by the trees on the left here, and we can tell this by the use concrete block instead of brick, and that bright orange. Off in the distance we can also see some very modern things. This is a modern building and a post-modern building with a sharp angle, and so what we're seeing here is reasonably, easily, probably close to a hundred years of building on the block.

We're seeing an intermingling of styles and there are some things that are radically different and some that attempt to fit in the context. There other really key things that are amazing references as to how long the city has been here are the trees, these are mature trees and they're here because they've grown in here, trees do take a while, these aren't recently transplanted giant trees, these are trees that have been trimmed to fit the street and fit the building, and have grown up in and around and next to it and so we can tell that this city has evolved and has been here for decades.

Here's that under construction image one more time and we can see in here a clear reference to the older forms and the newer. When we look at this image, we can see little shelves here right below the window and also above. Those aren't structurally necessary, those are there to hold up brick when it's put under a veneer to attempt to match into the neighborhood context. What we can also do is spot trends in the architecture. This is, we'll say it borrows some Italian influences or it's Italianate.

We can tell by the windows at the top of the arches, we can tell by the finely done stonework in the spandrel panels. Here's another example, and again we can see an evolution in those buildings. The Italianate has progressed to a much more modern context. It's still a brick building and it's been reinforced and it borrows some of the things, the window arrangement, the spandrel panels, those solid panels between the windows, but in this case, it's very modern in how the brick lines flow vertically and we perceive the whole thing as a solid volume versus an assembly.

This is a bit of a throwback and again we can see the evolution within one building. We can tell that this building has been added onto. The first three bays are alike, but the second two were probably an addition and you can also tell right there, where there's a solid panel in the brick. Most likely, that's where they added on a second part. Now, this recent addition could've been 80 years ago, we'd have to go look, but we can tell that is evolved, that there's a difference in here in the style of buildings and the methods of construction and we should look for that for clues as to the age and mood in the building, and yes, that is a car that was clipped in a couple of different photos and stitched together, it's not a new brand of mini or something in there.

Here's one more image and, again, we can tell there's been an evolution here. In this building, the Endless Knot, those are structural brick arches holding up the windows. In other buildings you've got concrete overhead or steel, and we can tell that this is a solid brick building because, at the time, that's what they built with. People have learned from some of the big fires, like in Chicago and San Francisco, and so they built buildings that had solid, non-burnable skins. They did still put wood in the inside sometimes but we can see here an advance in thought and technology.

Here's one more example, and in this building we're really seeing the skyscraper coming into being. Now you may not look and say this is a skyscraper but it's fairly revolutionary. It's got a concrete or steel frame and it's clad, it's not solid, and so instead of solid walls, this is an evolution in that we can see that this building is a radical rethink of building technology applied to a nice looking office with retail down below.

We can see this trend at anywhere in the city and most cities will show this, some kind of evolution that we need to spot in here in our cities, that they were not hatched, that there is a gradual building and population of the city, both by people, things and buildings so that we can see this evolution clear as day and it's been that way for years and years. We need to take this into account in our design so it's got that rich, varied context reflective of a city growing up.