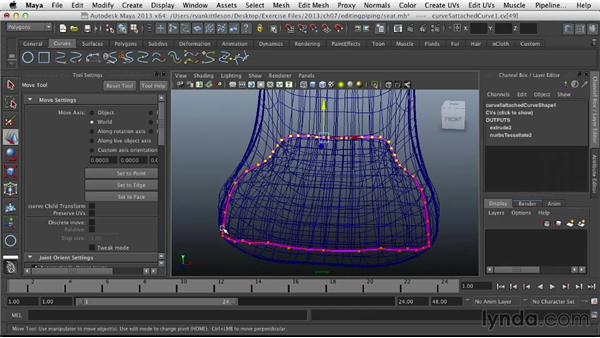 Join Ryan Kittleson for an in-depth discussion in this video Editing the NURBS curves, part of Modeling Vehicles in Maya.

There are just a few finishing touches to do to the seat. We need to edit the Piping Control Curves in order to get a better fit. There are just a few things that can get tricky as you do that. So in this video, I'll give you some tips on that. So we've got the piping created. It's an object with history, which means that it's being made from two different pieces; the shape curve and the path curve. If we change either one of those curves, the piping will automatically change shape accordingly. So for example, let's zoom in, and you can see there are a few places where the piping isn't fitting on the surface of the seat properly.

Now what you could do is just select that piping, and go to Vertex mode and try to edit it in a place, but that defeats the purpose of having made this out of NURBS. So I'm going to hit Z to undo that. So let's edit the shape of the piping by tweaking the path curve. Now the first problem you might run into is that it's hard to select this curve with the piping in the way; you can't really see it. Even if you turn on Wireframe mode, you might accidentally select the piping instead of the curve. So let's make this easier. Let's go into Show, and let's turn off all polygon objects.

So now we can only see the curves in our scene. Now it's really easy to select this. Okay. Now I can go into Control Vertex mode. And now that I'm in this mode, let's go to Show and let's turn Polygons back on. I'm going to hit 5 to go into Shaded mode as well. So now I can just simply grab that Control Vertex, and tweak this into place. So go ahead, and go around the seat and fix up any places where the piping is kind of coming up off the surface like right here. But I'm going to skip ahead for now and show you a few more editing tricks. You can cycle through the Control Vertices on a curve by hitting up and down arrows on the keyboard.

So let me go into Wireframe mode to make this easier to see. Let's zoom in on the selected vertex. Okay. So I'm just hitting up right now. And if I hit down on the keyboard, we cycle around the other way. So this makes it easier to select individual vertices. This comes in really handy. So for example, if you're in Shaded mode, you can't really see the Vertex that's inside of here because it's hidden by the piping object. So instead of going to Show and turning off Polygons and then selecting one and then going back to Show and then turning polygons back on, you can just simply use the arrows keys on the keyboard to cycle through them.

One last tip is that you might want to use soft selection to have a gradual falloff as you edit. So for example, you could just be editing hese curves and you want to move this one and then you decide you want to move this one a little bit and then you have trouble selecting the other one. So what you can do instead is hit B on the keyboard to turn on Soft Select. Now if you're in Shaded mode, you're not going to see anything right away, but if you hit 4 and you go into Wireframe mode, you're going to see kind of a falloff; a gradual transition from yellow selected down to orange.

I'm actually going to change the size of this falloff by holding down B on the keyboard, and then just clicking and dragging. So what you're going to get is a radius of falloff. So let's say I want to affect a lot of vertices along this radius. So I can just set the radius wherever I want, and now as I move it, I'm going to get a falloff to this transform. So that can be really great for making broader adjustments to the shape of these curves. So I'm going to turn Shaded mode back on by hitting 5. And now, feel free to just simply adjust any of the shapes of these curves.

If you need to get it to fit the shape of the seat any better, go ahead and do that. Or if any of these curves are a little bit wobbly and you want to adjust the shape, this is a great time to do that as well. Okay. So let's get this prepared for referencing into the main car scene. So what I want to do is deselect piping, and let's go create a locator. Okay. So I created it over here. I'm actually going to move this closer to the chair. Let's bring it up here. Okay, that should be good right in there. Now let's say for example you just selected all of these different objects here.

Let's actually grab everything, and then we'll deselect the locator, and then select it again and let's just parent everything to the locator by hitting P. Now watch what happens if we just move the locator now. What happens is you're getting a double transform. That's because you're moving the NURBS curves as well as the piping object. So you only want to move the piping, not the Control Curves. So I'm going to hit Z to undo that. And let's just hit Z a few more times to undo the parenting. So what I want to do is just select the seat object, and then select the piping object, and then Shift+Select the locator and hit P. So now, when I move the locator, it leaves those curves behind, but at least the object is going exactly where I wanted to go.

Go ahead and hit Z to undo that. Okay. And finally, let's just change the name of the locator. So go ahead and go into its Attribute Editor, click on the Locator 1 tab, and let's just call this seat. Now we're ready to save this out. So I've already saved it out into a location in the exercise files in our version number; and I made a folder called seat. So there's a finished seat right in this folder; and this is what we're going to reference into the main car scene. So you can go ahead and do that. Just follow the same instructions we did last time when we referenced the wheels into the car scene.

So hopefully, this demonstrates the power of NURBS curves. With just this basic understanding of how they work, you can create a huge variety of shapes that are based on curves. Then you can edit those shapes by simply tweaking the curves rather than having to edit the resulting polygon object. I use this type of modeling all the time to make tubular shapes.