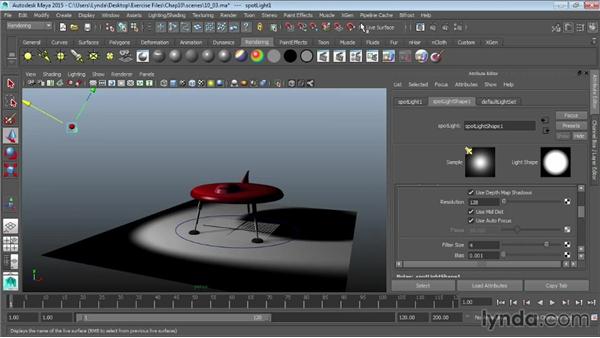 In the real world, all lights cast shadows. In Maya, lights can cast shadows, or they don't have to. We can actually turn shadows on or off. So, let's take a look at how to do shadows with lights in Maya. Now I have this simple scene here. And we have shadows turned on in our viewport, so we can kind of roughly see how the shadows work. And I have this light here and as you can see, it's casting a shadow. So let's select our spotlight in our scene and go in to the Attribute Editor.

Now in the spotlight, we actually can Scroll Down, to the Shadows Tab. And this where we control our shadows. Though the first thing we can do is we can dial in a shadow color, so we can turn it to various shades of gray. So if you don't want jet black shadows you can certainly give it a light gray or a dark gray color. If you want to go kind of psychedelic, you can certainly change it to any other color that you want. You can also turn shadows on or off, so not every light has to cast a shadow.

So if we scroll down here, by default lights use ray trace shadows and we can just turn those off. And the light will not cast a shadow. Now we have two types of shadows for lights, we have ray trace shadows, which is a default. We also have an older technology called depth map shadows, let's turn that on and take a look at that. Now this creates shadows through a bitmap. So you have two separate parameters here, that are really important.

One is the resolution of the bitmap. The other is called a filter. So what it does is it creates a shadow map of this resolution, and then it uses the filter to blur that. So if we keep our filter size to zero and dial down our resolution say to 64. You can kind of see this blockiness here and that's really how Maya is creating the shadow. So, if I bring up the map to say 128, you can see how it gets a little less pixellated.

Now if I were to render this, you can see the blockiness of that shadow. Now we can blur this out simply by upping the filter. So if I bring the filter up to say three or four that blurs the shadow. And now I have a very fast rendering, soft shadow. So right there is my soft shadow. So depth map shadows are actually fairly quick to render, and so sometimes they are nice to use. Now if I want a finer shadow, i can certainly increase the resolution of my bit map. Let's go ahead and bring it back up to about a thousand or so, then drop down the filter size to one. And when I render that, you'll see that I get a much sharper shadow than I had before. Now in Maya we can turn off depth map shadows and turn on the default ray trace shadows. Ray trace shadows are generally sharper and they can also go through transparent surfaces, so they're more realistic. Now by default, we have very sharp shadows in Maya, using ray tracing. So you can see that this shadow has a very sharp edge. Now we have controls that allow us to soften the shadow and this is the radius of the light, as well as the number of shadow rays. So let's go ahead and soften this particular light. I'm going to up the shadow rays to 16. Now this is how many times it will sample this shadow. And then the light radiuses, how big of an area are we projecting those shadow rays. So we can dial this up to one but actually, I'm going to bring it up even higher.

I'm going to type in five. We're going to make this a fairly big light. Now let's go ahead and do a quick render. As you can see the shadow is not so sharp and it is softer. So, when you create soft shadows using ray tracing, you have to use more shadow rays and the bigger of a light you have the more rays you need. Now this will slow down rendering, so just be aware of that. Now we've been focusing mostly on the spotlight, which generates a shadow that's very directional.

But another one that we can use is the point light. So I'm actually going to delete this light here, I'm going to go to our render shelf here and just select Point Light and create one of those, and let's just go ahead and move that up so it's about half way underneath that spaceship. And let's just do a quick render. And this is one of the reasons why we use point lights, cause look at the shadows. The shadows are coming in all directions from this. So the shadows are going off in multiple directions.

And that's because the point light casts it's light in multiple directions. And so this can be very useful for all sorts of shadow effects. So those are some of the basics of shadows. By default, Maya uses ray trace shadows and for most purposes those should be good. But if you want you can also use depth map shadows to get different effects.

6/26/2014
Need to get a strong foundation in Maya? Start here. This Essential Training course covers all the latest features in Maya 2015, while giving you a background in the basics of 3D modeling, texturing, animating, and rendering. Need a quick overview? Check out the first chapter of the course, which covers the interface and basic object manipulation tools. Author George Maestri then takes you deeper into polygonal modeling, editing and refining meshes, and NURBS modeling—for sculpting curves and organic surfaces in Maya. After that, learn how to create and apply materials to give the surface of your models color, texture, reflectivity, and more. Next, create realistic images (with lighting and depth-of-field effects) in the final rendering process, and finally, add movement and life to your characters with Maya's animation tools.
Topics include: