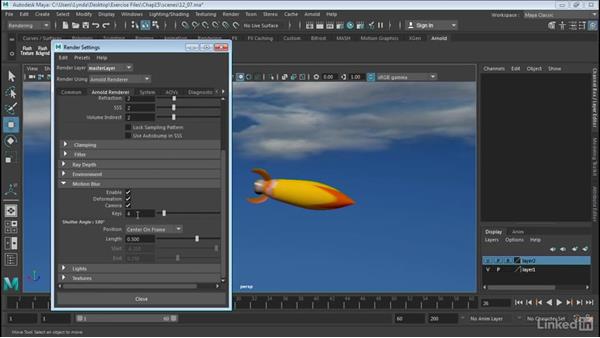 And then all we have to do is just enable it. Now we have a number of options here. We have whether or not motion blur will deform, and so that will take into account the deformation of a mesh, such as a character. Do we want the motion of the camera to affect Motion Blur? And then how many keys do we want to do? In other words, how many samples of Motion Blur do we want? So the higher the number here, the better the quality, but also the longer the render time.

And then, finally, we can also Center On Frame or on the Start or the End of the frame. So, typically, we keep this on Center On Frame, and then, also, how much of the frame are we Motion Blurring. So in other words, how long is the shutter open. So bigger number here means more blur. A lower number means less blur. So let's go ahead and just keep this on the defaults, and let's just do a quick render. So as you can see, we have some motion blur on this object.

Now if we go back into Render Settings, and increase the length, let's go ahead and increase this to, say, one, then that will create more blur. So let's go ahead and do one more render. And as you can see, we've got a little bit more blur in the scene. As you can see, it's fairly easy to set up Motion Blur in Arnold. It's a setting within the Render Settings window.