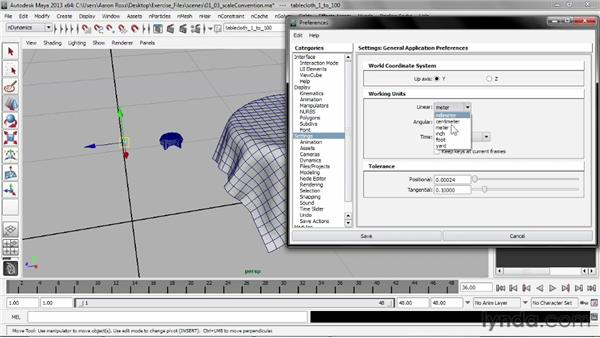 The number one most important consideration when working with dynamics is scale. If your objects are not at the correct scale for the dynamic simulation, then you cannot reasonably expect your simulation to work properly. And unfortunately, it's not really an easy or straightforward process in Maya. I am going to lead you through that process, and try to explain it the best I can. What I have got here are three table cloths made from nCloth, and each one is at a different order of magnitude.

This one is that a 1 to 1 scale, this is at a 1 to 10 scale, or 1/10 size, and this one is a 1/100 scale, or 1 to 100, so you see that that one is really teeny tiny. You have to adopt a scale convention before you begin to try to build a dynamic simulation. That means you've got to build your whole world to some known scale. In the world of Maya, objects have an absolute size. Now, the issue is slightly confused by the choice of units to measure the absolute size of objects.

So let's take a look at our Preferences under Window > Settings preferences > Preferences, and within here, we've got the Settings section. And you'll see Working Units here, and it's says Linear Working Units are set to Centimeter. What that means is that a Maya "Maya unit" is being represented as a Centimeter. Another way of saying that is that one grid line is currently being drawn 1 centimeter long. If I change this to meter, then the spacing between gridlines is now 1 meter, but that doesn't change the absolute size of objects in the scene; they remain constant.

This setting is merely a choice of how you wish to measure Maya's little miniature world. So you can change this all day long, and in fact, it will not affect your dynamic simulation at all. So this is where the documentation kind of leads people astray, because it tells people to model their scene to meters, and if you just set this Linear Working Unit to meter, and then build your scene, you may or may not actually get a physically accurate result. There's other variables here.

What I recommend is that you choose whatever unit of measurement is convenient to you -- and the default of centimeter is actually probably the safest -- and then build your scene according to those units. In other words, my tablecloth was about 100 units from end to end, or 1 meter square. So I am going to leave that as centimeters. As we will see, once we have established a scale convention, then we can tell Nucleus what scale convention we've adopted, and then the simulation will actually run properly.

One last point of information is that Maya's dynamics engine, whether it's nCloth, or Rigid Bodies, or whatever, they all assume that you've built your world at 1/100 scale; not at 1 to 1 scale. So if my object were at 1 to 100 scale, then I'd build it to be 1 centimeter from side to side, but then kind of imagine in my head that it's in meter, because you can't actually build a gigantor scene at 1 to 1 scale, meaning that if you have a very large scene that's, let's say, the size of a city, it's not possible for you to build that at 1 to 1 scale; you actually have to make a miniature.

So that's why these are the three main conventions that you will see in Maya scenes: 1 to 1 scale, 1 to 100 scale, which is what dynamics want you to build at, and 1 to 10 scale, which is kind of a compromise. It's just important that before you begin building things, you decide what scale convention you're going to adopt, and then carry that through in the construction of all your assets. Then when you get to creating dynamics, you can adjust the dynamics engine to correspond to whatever scale convention you have chosen.

I actually build all of my scenes at 1 to 1 scale, and that's the scale convention that will be adopting in this course.

11/30/2012
Take an in-depth look at nCloth, the Maya toolkit for simulating high-resolution mesh cloth for 3D characters and animations. Author Aaron F. Ross explains the roles played by the various "actors" in an nCloth simulation, including the nucleus solver, nCloth objects, passive colliders, and nConstraints. The course begins with basic simulations such as flags and ropes, then progresses to building a simple garment, until finally integrating animation and special effects like falling leaves and tearing cloth. Aaron also covers performance optimization techniques such as nCloth and nucleus solver settings, proxy objects, collision layers, the Wrap deformer, and more.
Topics include: