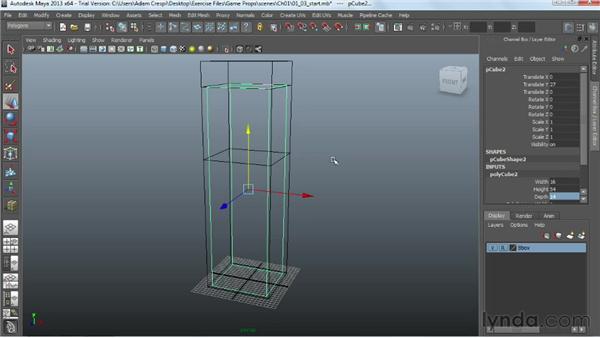 With my bounding box in place, I'm ready to start modeling my actual gas pump. I'm going to make a new box, holding Shift+Right-click and choosing Poly Cube. I'll make a box and then get it in the right place. Because I know I put the original box around 0, 0, I can do the same thing here, picking all three translates and pressing 0. Now I'll get it in the right place by moving it up. I really have no idea what the height of this box is, so I'll go into the INPUTS here and change it. I'll put the height here at 54.

My thought is I'm going to end up extruding that top out to get the curves right, and so I'll come back up to the top here in the Translate Y and put that at 27. This way it snaps in the middle. My other thought is that these sides are curved, that probably the bounding box reflects the outer part of the curve, and those shallow curves in the gas pump are not terribly thick. So this inside box needs to be a little bit smaller. I've made my original 18 x 16, so I'm going to put this one at 16 x 14.

That way it fits snugly in the middle there. And because I've put in zeros in the X and Z, it's already centered on my bounding box. A little careful placement goes a long way when you're modeling. I'll start to block out the basic form. My thought is I want an all-quad workflow. What that means is that everything is a four-sided polygon, and those triangulate nicely when we import them into a game engine. We can have more sides if we need. Everything will be reduced down to triangles anyhow. But it's good to have a nice even flow.

That way we avoid smoothing or softening artifacts on edges. Now what I'll do is get those subtle curves in. I'll go back to my reference and take a look. Back here in Photoshop, I'm going to turn off my layer 1, my overlay lines. It looks like I need a curve that kind of radiuses that corner. There is this front panel that actually seems to pop out a little bit. And finally, there is the sides which have a little bit of a curve to them as well and then obviously that curved top. My thought then is I'm going to need vertical loops running all the way up the sides.

I'm going to get those in and get these sides bulging out or curving as they're supposed to be for that streamlined form. With all the vertical loops in place, then I'll get the curved top in. Here in Maya then, I'll scroll down into the INPUTS in that polyCube, and I'm going to put in Subdivisions Width and Depth. I'll put the Width Subdivisions in at 3, and I'll also put the Depth Subdivisions in at 3. I'll hide my reference, and I'm ready to start adding in a bit of those curves.

I'll press 5 for shaded view, and I'll press F11 for face. I'll pick this side and spin around, hold Shift, and pick the other one. I can either move them or I can scale them, and my thought is I'm going to scale them. I'll click and drag on the X axis, doing a little bit of precision movement right here, making sure I'm scaling in one direction only and giving those sides a gentle bow. Now, I'll do the same on the front. In this case, I'll scale them out on the Z axis just a little bit. And there's the start of that curved form.

Now, I can begin to bevel corners and add in those tighter radii. I can also then start to look at the top. And finally, because I have a clean flow all the way up, I can add in divisions across for the display.