Add depth of field in Arnold 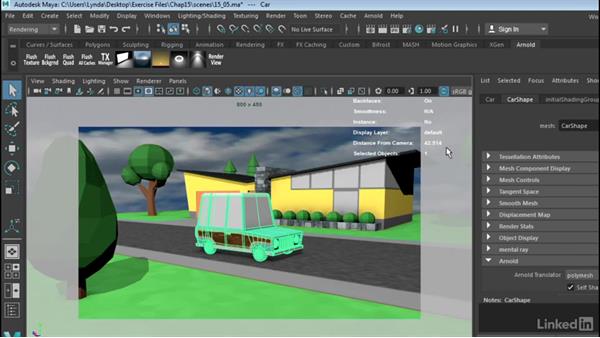 Depth of Field mimics the focus effects found in real world cameras. Learn how to create depth of field effects in the Arnold renderer. In this video, George demonstrates how to create depth of field and focus effects in Maya’s Arnold renderer. He shows how to set the focal point of the camera as well as how to adjust key attributes involved in the effect.

- [Voiceover] In the real world, cameras don't always focus on everything in the scene. Somethings may be in focus, and some may be out of focus. Now this can be used to draw attention to parts of the scene. Now, we can do the same thing in a renderer, using what's called a depth of field effect. So let's take a look at how to do depth of field and focus effects in Arnold. So here I have a simple scene and it has no focus effects on it whatsoever.

So let's go ahead and just do a render of the scene so we have a reference for that. So here we have the image, and as you can see, everything is perfectly in focus. Now let's go ahead and just save this image out to the buffer and minimize the render view window. Now I want to set up a depth of field effect. And we can do that in the camera. Now this is very similar to how we do it in the other renderers that Maya supports. So all I need to do is select my camera and go into the attribute editor.

Now we have our camera attributes here such as our angle of view and focal length. And if we scroll down, you'll see that we have an Arnold tab. So this is where we set up camera specific things for Arnold. Now the first thing you'll notice is a camera type. We actually can create different types of cameras so if you want a fish-eye lens or orthographic or spherical projection, you can do that. I'm gonna leave it on perspective, which is kind of more of a real world camera.

And then we can also do other effects such as rolling shutter, which kind of simulates how video cameras work. But what I'm really looking for here is depth of field. So if we enable depth of field, this will start to create focus effects. Now the important thing here is focus distance and aperture size, those are the two values that we need to deal with. Focus distance is where in the scene is the camera focusing.

Now you may remember from looking at the other renderers that probably the easiest way to measure this is to use what's called a heads up display. So let's say we wanted this car to be in focus. I need to know how far away from my camera that car is. Well we can do this by going into display, heads up display, and turn on object details. Now this will tell you a lot of details about the object but the most important one is, distance from the camera.

And in this case, it's 42.5. If I wanted the house, I could see that the house is 100.8 units away and this tree is 24 units away. But I want to put the car into focus so I need to remember this number, 42.5. Now I'm gonna go back to my camera. So I'm gonna do a select camera, and that number 42.5, I'm going to plug into focus distance. Now the next value is going to determine how much of this scene gets blurred.

And that's called aperture size. Now unlike other applications where this is actually something equivalent to an f stop on a camera, this is actually a physical measurement. So this is physically how big is the aperture of the camera in units. Okay, so I did some experimenting and I'm gonna start off with a fairly low number. I'm gonna start of with .25. Now in addition to this, we can turn on aperture blades.

So if you want to simulate a specific lens, you can see how many blades that lens has. And also what the curvature of the blades are and how much the blades rotate when the camera opens and closes the aperture. So there's all sorts of control about that. But I'm just gonna go ahead and just kind of leave this at seven blades and we'll leave everything else alone. And let's go ahead and just do a render of what we have.

So I'm going to go back into render view and just do a render. So as you can see, we do have some blurring and depth of field effects. So the car is in focus and the foreground and the background are slightly out of focus. So if we go from the original, which was everything in focus to this, you can see how it's just slightly blurring as we go into the scene. I'm gonna go ahead and keep this image and let's go ahead and bring our aperture size up quite a bit.

And we're going to bring it up to one. And then I'm going to go back into my render view and do another render. So as you can see, we're getting a lot more blurring. So this is .25 and this is one. The values are typically between .2 and one somewhere in that range. And you may have to play with it depending upon the scale of your scene. But as you can see, depth of field is fairly easy to set up in Arnold and you have a lot of control over the individual attributes.