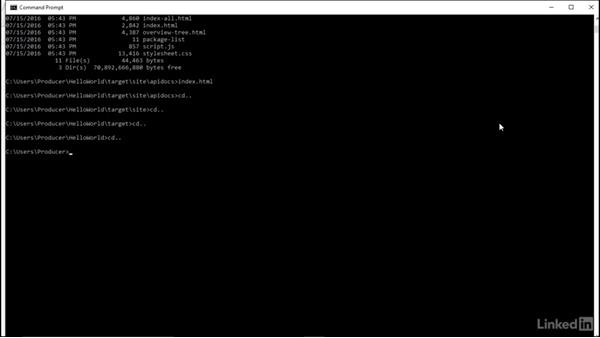 The archetype tool creates a Maven project from an existing template. It can also be used to CREATE an archetype from an existing project for future re-use. For each tool, we can find the goals available for that tool. Here are the goals for archetype: generate, create-from-project, and crawl. Another feature of the Maven website, is the examples for each of the plugins.

- [Instructor] The last set of plugins that I want to review…are the tools plugins.…Let's scroll down a little bit,…and again you can see the list of plugins under tools.…They're sorted alphabetically and not by importance.…One of the tools that we'll use,…and that you'll probable find very useful,…is the third one down called the archetype.…The archetype plugin generates a…skeleton project structure from an archetype.…An archetype is like a template.…Let's take a look at the goals available for archetype.…Again, I click on the tool name.…

The archetype plugin gives us some information,…let me scroll down a little bit,…and we'll see the goals.…As you can see, there used to be a create goal,…but that's been deprecated and…replaced with the generate goal.…Generate creates a Maven project from an archetype.…We could also create an archetype from a Project,…kind of work our way backwards,…and we can use the crawl goal to search a repository…for archetypes and updates the catalog.…Although the information on the website is very useful,…