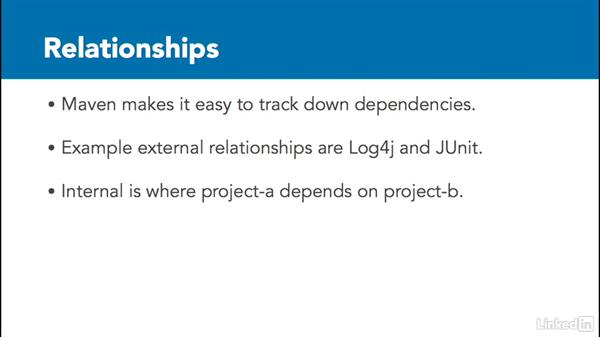 One of the reasons to use Maven is the ability to easily track down dependencies using the POM. The relationships between projects can be external, ie: Log4J or JUnit; or internal where project-a depends on project-b. Project relationships are established using Maven Coordinates. Remember, a Maven coordinate is made up of groupId (similar to a java package), artifactId (the project's main identifier), and version. To indicate a project relationship we describe the dependency as groupId:artifactId:version, ie: org.springframework:spring:2.5

To indicate a relationship,…we describe the dependency as group ID, colon,…artifact ID, colon, version.…Don't forget that projects also inherit…project relationships such as dependencies…from parent POM files and from the super POM file.…