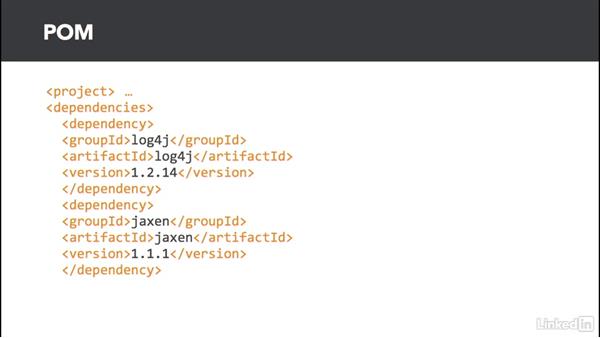 As a programmer, we often rely on other components available to us. Maven provides support for both internal and external dependencies. One of the most common dependencies is the junit which is used for testing a Java program. In this sample code, I have am only displaying two of the dependencies for this project, but more can be added using the xml tag dependency. Since the scope tag is not included, the default scope value of compile is assumed.

- [Instructor] Project Dependencies.…As a programmer, we often rely…on other components available to us.…Maven provides support for both…internal and external dependencies.…One of the most common dependencies is the junit dependency.…This is used for testing a Java program.…Other examples include log4j and jaxen, just to name a few.…Here is some sample code.…As you can see, I am only displaying two of the dependencies…for this project, but more can be added…using the XML tag dependency.…