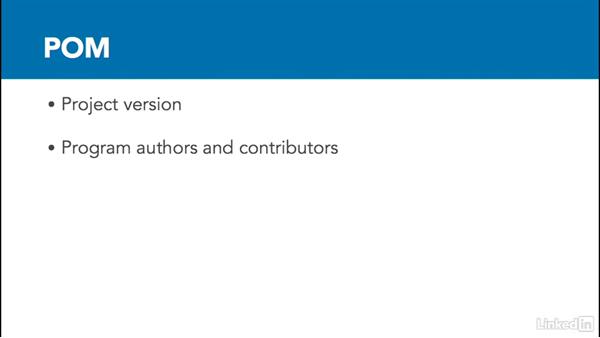 As I’ve stated, Maven uses a Project Object Model or POM. This model has a set of standards, a project life cycle, a dependency management system and logic for executing plugin goals at certain phases in the life cycle process. One of the things that makes maven so powerful is that it relies on the concept that projects are setup with default behaviors.

- [Narrator] As I've stated,…Maven use of the concept of a Project Object Model,…or POM.…This model has a a set of standards,…a project lifecycle, a dependency management system,…and logic for executing plugin goals…at certain phases in the lifecycle process.…One of the things that makes Maven so powerful…is that it relies on the concept that projects…are set up with default behaviors.…For example, the pom.xml file is always located…in the base directory.…

The source code must be in a certain directory.…Resources necessary for the project…are in a another folder or directory.…Test cases are in a specifically named folder.…And a target folder is always created…that's used for the final JAR file.…Let's take a look at the folder structure created by Maven…for a calculator program.…As you can see the base directory is called calculator.…Inside calculator we have our src folder,…as well as our target folder, and our pom.xml file.…

Inside the source folder is where we'll find…our main Java programs and our source code,…