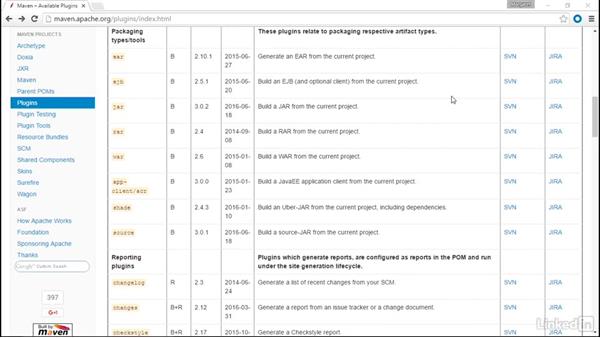 Some of the common packaging tools include: Jar Java archive POM project object model EJB or Enterprise Java Beans Rar Resource adapter archive War web application archive Among others Each packaging type has a different set of goals. These elements affect the steps required to build a project. For example, if the goal is pom, the project will run the site:attach-descriptor goal during the package phase. A jar type runs with jar:jar goal instead.

- [Voiceover] The next type of plugins that I'd like…to review are the packaging tools.…So if we scroll down, we see our core plugins,…and the next section talks about…the packaging types and tools.…As you can see here, the list starts with EAR, EJB, JAR,…RAR, WAR, app-client,…shade, and source.…As you start to use maven, I think you'll find you use…some of the packaging tools more than others.…If you're a Java programmer, you'll probably use…the JAR plugin, which is used to build a JAR…from the current project, where JAR is the Java Archive.…

The EJB is also used for Java projects,…but that's the Enterprise Java Beans package.…RAR stands for Resource Adapter Archive.…WAR is a Web Application Archive.…Each packaging type has different set of goals.…These elements affect the steps required to build a project.…For example, if the goal is POM, the project will run…the site attach-descriptor goal during the package phase.…A jar type runs with JAR-JAR goal instead.…

JAR is the default packaging type in maven,…and the most commonly used.…