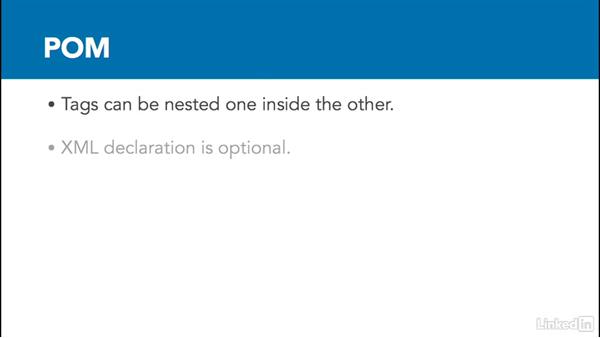 The Project Object Model is documented in an XML file (where XML stands for extensible markup language) located in the base directory of your project. The syntax for xml looks similar to html using the angle brackets to indicate the beginning and end of an element. The difference is that the elements do not follow any standard list of keywords, instead, they are descriptive of the content inside the tags. Every open XML tag must have a corresponding closing tag and tags can be nested inside one another.

- [Voiceover] The Project Object Model Syntax.…The Project Object Model, or POM,…is documented in an XML file, where XML stands for…Extensible Markup Language, which is always located in…the base directory of your project.…The syntax for XML looks similar to HTML,…using the angle brackets to indicate the beginning and end…of an element.…The difference is that the elements do not follow…any standard list of keywords.…Instead they are descriptive of the content inside the tags.…

Every open XML tag must have a corresponding closing tag.…And tags can be nested one inside the other.…The file can start with an XML declaration,…but that is optional.…All values in the file are declared as XML elements.…All projects extend the super Project Object Model,…or POM, automatically.…And the specific project POM contains…all pertinent information for that project.…Here is an example of a pom.xml file…that includes the XML declaration,…and the required maven coordinates.…

As you can see, the XML declaration takes up…the first four lines.…