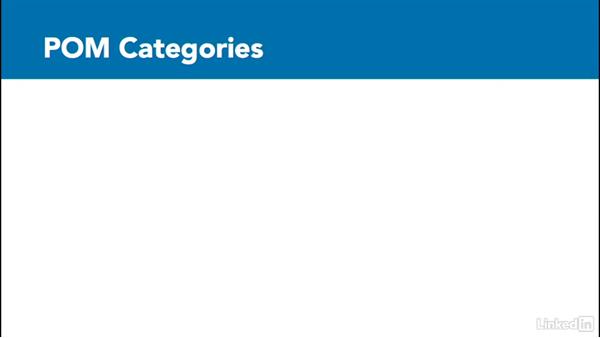 The POM contains all the information about a project. Although this is not a comprehensive list, some of the most common categories that are usually included in the POM file are: Maven Coordinates (group id, artifact id and version) project’s license List of developers and contributors to the project LIst of project dependencies The name of this project The url associated with this project Packaging type Scope of the element listed Even information about inheritance

- [Instructor] The Project Object Model…or POM Categories and Configuration.…The POM file contains all the information about a project.…The file is stored with an .XML extension.…Here's an example of POM.XML file…that has the minimum amount of information required.…As you can see, it has a groupId,…an artifactId, and a version.…Remember those three things make up the Maven coordinates…and are required for all projects.…Although this is not a comprehensive list,…some of the most common categories…that are usually included in POM file…include the project coordinates, which we just saw,…the project's license information,…a list of developers and contributors to the project,…a list of project dependencies, the name of the project,…the URL associated with this project,…the packaging type, the scope of the element listed,…and even information about inheritance.…

Each of these categories has its own XML tag.…For example, the scope tag would be the less than sign,…the word scope, and the greater than sign.…Although these are not all the categories…