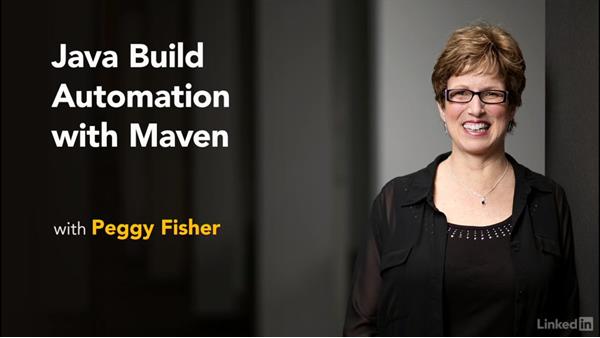 The Apache Maven framework is one of many projects developed and available through the open source apache license. Apache Maven is a software project management and comprehension tool. Based on the concept of a project object model (POM), Maven can manage a project's build, reporting and documentation from a central piece of information. After watching this series, I hope you have a better understanding of the process of using Maven to create new projects, updated existing projects, and even integrate with popular IDE’s. There is a lot to learn when using Maven, so make sure to bookmark the apache.maven.org website for future reference.

- [Peggy] The Apache Maven framework…is one of many projects available…through the open source Apache license.…Apache Maven is a software project management…and comprehension tool.…Based on the concept of the project-object model, or POM,…Maven can manage a project's build, reporting,…and documentation from a central piece of information.…After watching this series,…I hope you have a better understanding…of the process of using Maven to create new projects,…update existing projects, and even integrate…with popular IDEs.…

There's a lot to learn when using Maven,…so make sure you bookmark maven.apache.org website…for future reference.…Most importantly, remember to always be a lifelong learner,…keep programming, and have fun while doing it.…Check back often to see what new and exciting courses…that are waiting for you to dive in and explore…here at lynda.com.…Thanks for your time.…I hope to see you again.…