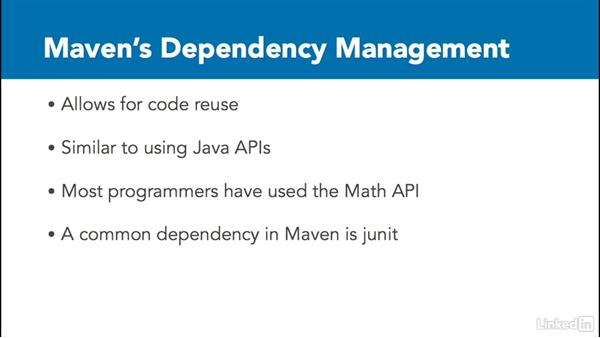 As a programmer, we often taken advantage of code reuse, especially in the realm of open source programming. For example, in Java, we use APIs that contain libraries of software components that we can use instead of re-creating the source code from scratch. Maven also allows us to reuse existing components and plugins using the dependency section of our POM file. For example, a common dependency when working with Java is the JUnit component.

- [Instructor] Another feature of Maven…is the way it handles Dependency Management.…As a programmer, we often take advantage of code reuse,…especially in the realm of open-source programming.…For example, in Java, we use APIs that contain libraries…of software components that we can use…instead of recreating the source code from scratch.…Almost all Java programmers have, at some time,…used the Math functions or the String functions…in their coding.…These functions include math.pow to find the value…of a number raised to a power,…or math.min to find the smallest of two numbers.…

Some of the String functions include the .length command,…the .substring, two lower, two upper.…These are just a few examples of what it means…to reuse existing code.…Maven also allows us to reuse existing components…and plugins using the dependency section of our POM file,…our Project Object Model file.…For example, a common dependency when working with Java…is the junit component.…We define dependencies inside a project's POM file…using it's Maven coordinates.…