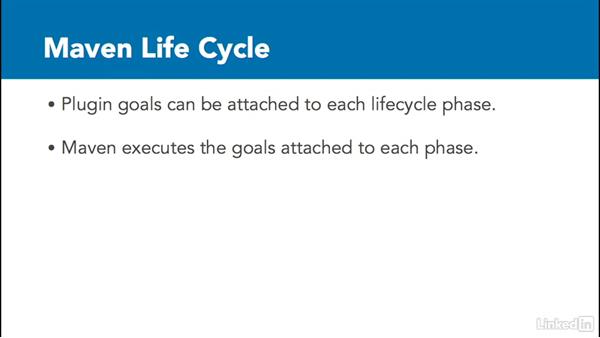 Here is a high level overview of the flow when using Maven: Generate a project that consists of a POM and source code that is assembled in the Maven Standard Directory Layout Execute Maven with lifecycle phase as an argument that prompted Maven to execute a series of plugin goals. Install a Maven artifact into our local Maven repository Finally, run the app

- [Instructor] When using Maven…it's important to understand the Maven life cycle.…Let's take a look at a high level…overview of the flow when using Maven.…Maven starts by generating a project.…A project consists of a POM or Project Object Model…and source code that's assembled in the Maven…standard directory layout.…Next, we execute Maven with a life cycle phase…as an argument that prompted Maven…to execute a series of plugin goals.…After that, we can install a Maven artifact…into our local Maven repository.…

And finally, we can run the app.…Let's take a closer look at the default…life cycle phases.…One of the phases is Validate.…Validate is used to validate the project…to make sure it is correct and all…necessary information is available.…Another phase is Compile.…We compile the source code of the project.…Test.…Test compiles the source code using…a suitable unit testing framework.…These tests should not require…the code be packaged or deployed just yet.…

Package, take the compiled code…and package it in its distributable format.…