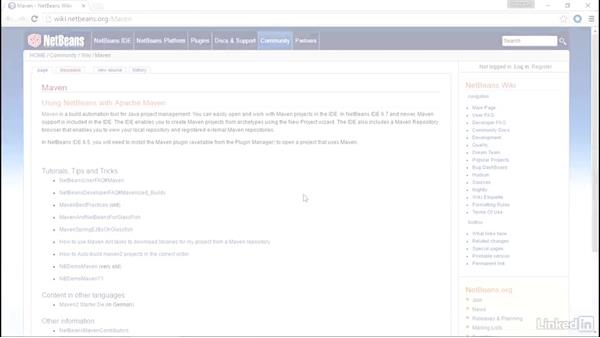 Maven is already setup to integrate with many of the commonly used IDEs such as NetBeans, Eclipse, and IntelliJ.Starting with NetBeans version 6.7, there is full Maven support.If you are accustomed to using Eclipse, then you want to use the Eclipse version M2Eclipse, which is specifically designed for Maven integration. Maven integration is already included in the IntelliJ IDEA.

- [Narrator] Maven's popularity has grown,…and many of the integrated development environments…used with Java have started…to integrate Maven with their product.…For example, Maven is already set up to integrate…with NetBeans, Eclipse,…and IntelliJ, just to name a few.…Starting with the NetBeans version 6.7 and higher,…there is full Maven support.…You can even use the NetBeans IDE…to create Maven projects from archetypes…using the new project wizard.…

Let's take a look at the Wiki site.…From the Wiki page,…definitely take notice of the tutorials,…tips, and tricks for using Maven.…If you are accustomed to using Eclipse,…