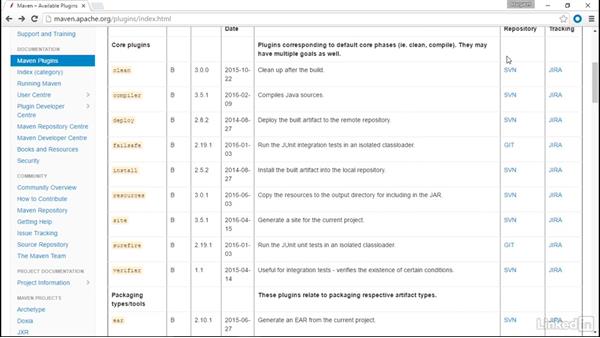 - [Instructor] Throughout this series,…we've been talking about this idea of a plugin.…Maven has several core plugins.…A plugin is a collection of one or more goals.…And a goal consists of a unit of work in Maven.…In this image, you'll see there are three goals…associated with my sample plugin.…A plugin may have one or more goals.…Maven consists of several core plugins.…These core plugins include a JAR plugin,…which creates the JAR, or Java Archive files.…

A compiler plugin,…which contains goals for compiling source code…and unit tests.…And a Surefire plugin,…which is used for executing unit tests…and generating reports.…Maven also provides the ability to define custom plugins.…A custom plugin can be written in Java,…or a plugin can be written in any number of languages,…including Ant, Groovy, Bean, Ciao,…and as previously mentioned, Ruby.…Let's take a look at all the Maven plugins.…The complete list of Maven plugins…is available at the maven.apache.org site, /plugins.…

If I scroll down a little bit,…we can see the list of plugins.…