Working within the MatchMover interface 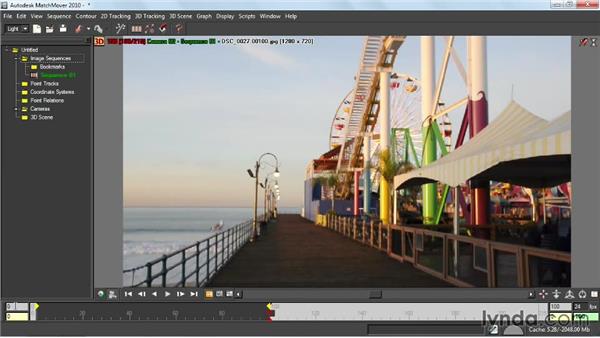 So let's go ahead and start off with MatchMover. Let's take a look at the basic MatchMover interface. As you can see, MatchMover is fairly well laid out. We have a very big view port here to view the footage that we're going to be matching. Along the top, we have some standard menus such as File, Open, Close, that sort of thing. Along here, we have some icons for some of the commonly used functions such as New, File Open and Save and so on. And on this same line is this pull-down menu which switches the interface from Light which is what we're seeing now to Full which gives you a lot more options and a lot more control over how you match your footage.

For right now we're just going to be looking at the Light interface so I'm going to go ahead and switch that back. Now below here, we have a browser which basically contains all the objects and tracking information that we're going to have in our scene. Now this will grow, as we go through and track stuff, in the scene. Now the big window here is obviously the view port. And this is where we can look at our footage. We can scrub through this footage, using the timeline. Or we have play controls here. So if I just hit Play, Stop, I can play through the footage and stop it. You can also go a frame at a time.

Go to the end, just like with anything. You can also play the footage backwards, if you want. And we also have some controls here which allow us to Loop the footage. Or do PingPong of we need to. Now if we want to, we also can create work areas just by grabbing this little yellow triangle and bracketing in the footage that we want. So if we're only working with a small portion of this footage we can just have that footage active. So we don't have to go through the entire.

Yeah if we want to work on it a section at a time and these numbers actually show up here. If I wanted to I could actually type that in as well. Along here we also have an option to control our frame rate. Now the view port itself can be either 2D which is what we've been looking at which is basically just the footage itself, or we can look at it in 3D. Because what we're doing here is we're looking at 2D footage and computing 3D information.

That's what MatchMoving is, is you're taking this piece of flat footage and deriving your 3D information. So once we've derived that, we want to take a look at that within MatchMover. And we can do that by clicking on this little icon here that switches between 2D and 3D. Now it's a little confusing here because when you're in 3D mode, it actually says 2D, and the button is really saying, take me to 2D. Or take me to 3D. So once we're in 3D mode, we can actually navigate just like we can in any 3D application, such as Maya.

We have a number of navigation controls here. We can actually pan. We can truck or dolly. We can rotate. And we can tilt left and right. We can also use just standard commands. So if I hold down the Alt key and left click. I pan. Right click rotates. If you hold down Ctrl+Alt, and left click, you're going to dolly. And if you right click, you zoom. Now the difference between dolly and zoom is you're actually moving the camera versus zooming the camera.

2/10/2014
Autodesk MatchMover is the perfect camera-tracking companion for Maya, and it now comes bundled with Maya 2010 and later. Staff author George Maestri gives you an introduction to MatchMover's interface and automatic matching capabilities, and then shows how to import MatchMover scenes into Maya, solve for cameras, and do object-based tracking.

Video: Working within the MatchMover interface