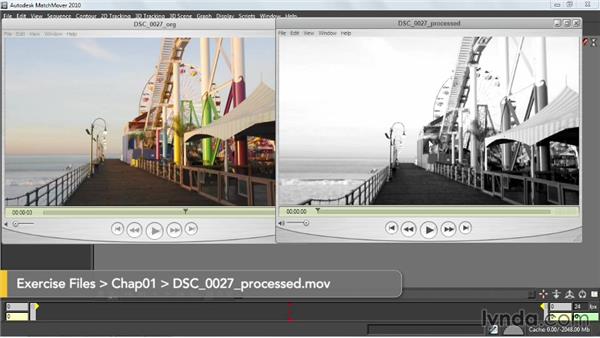 When starting a match in MatchMover, the first thing you need to do is load an image sequence. And we can do that by going File > Load Sequence. But before we do that, let's take a look at the types of images that MatchMover works with best. I've got a couple of movies here, and I'm going to open this one up first. Now, this is actually a pretty representative of a shakey cam type of shot. Now, one of the things about this particular shot is that it has some really good perspective changes.

When you give MatchMover footage that has good perspective information, it'll calculate the scene that much more accurately. Let me show you what I mean by perspective information. So, for example, here we've got this light pole, and the distance between the buildings and the background and the light pole. Now, as we scroll, and as the footage proceeds, you can see how that distance gets a lot bigger. This is really good information. It tells MatchMover that his pole is a lot closer than the building.

And the same goes for a lot of these things in the scene. Because we have the camera moving from one side of the street to the other, and this gives us good perspective information. I'm going to show you another shot here which actually doesn't have much perspective information. So here we have a camera that's kind of shaking but really not much is going on in terms of perspective. If you notice the leaves up front are actually having some perspective changes, but the actual background doesn't really have that much information.

This is going to make it harder for MatchMover to get accurate scene information from the footage that you give it. Now, this isn't to say that it's impossible to track the shot, it's just going to take that much more time and effort in order to get a good track. Now, another thing that MatchMover needs is it needs good visual quality; it needs good edges to determine a track. So, if I have a piece of footage that's like this, so you can see that while I actually do have quite a bit of information here.

But if I wanted to actually make it more MatchMover friendly, I could go through and process that footage to give it more contrast. Sometimes in a low contrast scene, you might not have enough edges for MatchMover to really track. So, processing the footage can help MatchMover get a better beat on to where everything is in the scene. You could track the high contrast version in MatchMover, and then when you actually go for your final composite, you can actually bring up the original footage and just swap that in.

So the main point here is just to make your footage as friendly to MatchMover as possible to get the best results. So once we have the footage that we want, we can go ahead and load that into MatchMover. So I'm going to go ahead and do File > Load Sequence, and I'm in chapter one of my exercise files, and the folder name is city shot. Now notice here, we have an image sequence not a movie file. MatchMover does not support movie or avi files, it only supports image sequences.

So, you can have any one of these bitmap files, such as JPEG, Maya images, Target TIFF, basically the usual suspects. And these have to be in an image sequence. So, I'm going to go ahead and select my first image of the sequence. Now, these are just JPEGs, and the reason I chose JPEGS is because they're a little bit smaller, so they'll scrub faster. And I can set my sequence options here, such as how long the sequence is, whether or not there's interlacing. And also settings about the camera. Is the camera free? Is it fixed? Is it dollying? That sort of stuff. What's the frame rate? And also, is the focal length constant or variable? In other words, are you zooming the camera, or are you just keeping the camera with a fixed lens and just moving it.

So, once I have all of that set, let's go ahead and open the footage. And once it comes in, you'll see it here, in your little browser, and we can scrub through. So now your footage is successfully in MatchMover. Now remember, better footage is going to be better tracking. And if you need to process the footage to get a better contrast, then go ahead and do that.

2/10/2014
Autodesk MatchMover is the perfect camera-tracking companion for Maya, and it now comes bundled with Maya 2010 and later. Staff author George Maestri gives you an introduction to MatchMover's interface and automatic matching capabilities, and then shows how to import MatchMover scenes into Maya, solve for cameras, and do object-based tracking.