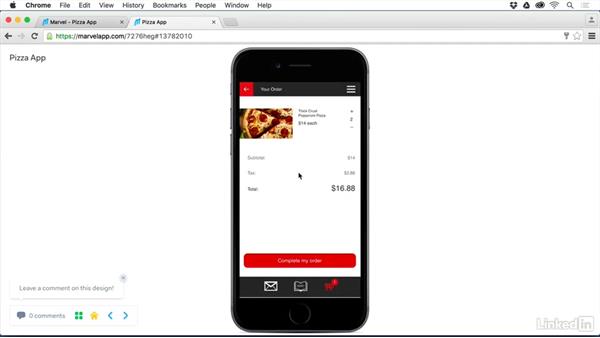 Prototyping is a way for us to test both UX (user experience) and UI (user interaction). Using Marvel app, you can generate a prototype that you can share and test your design with. In this video, you’ll take a look at how to get started with the prototyping aspects of Marvel app. This includes how to edit the screen and an introduction to hotspots.

- [Instructor] Let's start talking about prototyping, which is one of the reasons why we're using Marvel App to begin with. We've got the Pizza App open here, and I hope you've got some screens in there, or at least some kind of screens that you've been playing around with or working with, and the main idea here with Marvel App is that we're going to add our design content using a bunch of methods that we discussed previously. And now we're going to go in and we're going to start to add the interactivity. If you notice right up here, you're going to see we have the Play button. So for this project, or prototype, they call it, we can go take a look at it.

I'm going to tap on the Play button here, and we can play this on-device if we have the app, for instance, iOS or Android, or we can do it right here, there's a lot of ways to get this done. But you're going to see it's going to put it in a shell of whatever you chose to be the size of the content, so essentially when we started this project, we picked iPhone Six. You're going to notice right here, here it is right here. If we want to, we don't have any interactivity yet, meaning if I come out here and just start clicking, and trying to swipe and things, there's nothing out here yet. But if you look down here, you're going to see, we have a series of buttons we can work with.

I can tap on Next Screen, and you're going to see the Arrow key, there's a shortcut there, you can use the Arrow keys on your keyboard to go between screens, there we go, something like that. And it's just going to look, not great, to be honest, but that's fine. You can go to the Home screen, which is what we're at right now, and you're going to see a shortcut there, the letter H. You can even look at the different screens overview, if you're trying to jump to one to see what's going on. And so if I tap on Screens Overview there, I'll see all the screens, I can then click on one, it'll take that screen, and it'll preview it in the phone, so we can take a look and see what we've got here.

Okay, now, this is going to open in a separate browser window typically, so if we want to go back, we can just close this window and come back to the project. Now the way we start to add this interactivity where people can click or tap, is by adding hot spots. So we actually have to go to the screen we want to add the interactivity to, and we go Edit the Screen. So this is one of the first times we're going to go in here, but if you come to the Home screen, this one right here, come in to the middle, hover over it, you're going to see the big button Edit. Go ahead and tap on that, and it's going to take us in.

Now I just want to talk about this just for a minute, and then we're going to jump into adding interactivity. This is where we can go to, like I said, add hot spots. You'll notice up here that we have this slider, you can just slide between all the different screens that we have. You can also use your Right Arrow and Left Arrow on your keyboard to go between them. And you'll notice the name of the screen right here, you'll also see that we have Replace, which allows us to replace the image currently there, and that's just going to say, oh, okay, let's go out and grab another one, usually on your hard drive, and replace it. 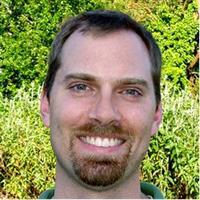 9/9/2016
Prototyping is a big part of any app or web design workflow these days. You can test both the user interaction (UI) and user experience (UX) before you jump into coding. It's a low-risk, low-impact activity with many long-term rewards. And with Marvel, the free web and mobile prototyping app, the process is even easier. In this course, Brian Wood shows how to set up a Marvel app account, design a prototype for an app, link screens, add interactivity, and share your prototype with others for review. Plus, learn how to embed video via links and set up timers to mimic transitions between screens.
Topics include: