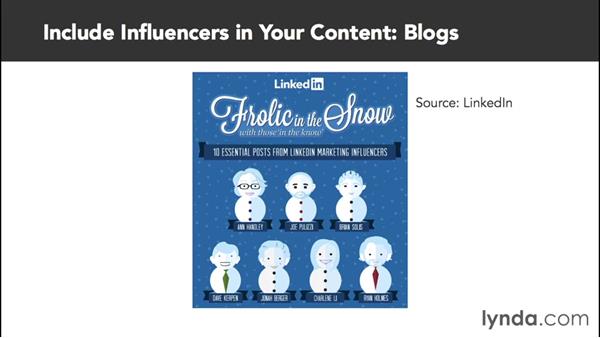 You can also find influencers at conferences that are relevant to your industry. Network, make those connections, especially with the people that are speaking at those conferences. Industry bloggers are great. Surely, hopefully, you have a list of bloggers that you follow on a daily basis. Reach out to those folks. And then there's various software solutions that actually track influencers and tell you specifically who is influential in your market. So let's see some influencer marketing and content marketing in action.

This is an example of a content piece created by LinkedIn that features 10 blog posts from marketing influencers. LinkedIn also created fun snowman avatars for each influencer to further increase the chances of influencer promotion and blogging about the company and the asset. Once you have included influencers in your content, ask them to share it from their social channels. So here's an example of an influencer company sharing content after they were featured. This is great because it gets your content out there from additional networks of your influencers.

Asking an influencer to blog about your content or hoping she will, anyways, is a great way to increase reach for your content assets. In this example from Marketo's "Definitive Guide to Lead Generation," Ann Handley, a content influencer, blogged about the visual style of the e-book. You can see that this blog post generated 718 shares on Twitter, 90 shares on Facebook and 130 shares on LinkedIn, so this is fantastic for additional visibility. So let's go over some tips for influencer marketing.

First of all, be aware of your asks. You don't wanna always be asking the same people the same things all the time. So it's important to know what's in the pipeline already and who you've asked favors of. Influencer marketing is a two-way street. So make sure that they're getting something out of the relationship, as well. Show them the WIIFM, the what's in it for them. Make sure they know that helping you is beneficial for their personal brand, as well. And then, always show your appreciation when an influencer participates in or shares your content.

You can do this by simply saying thank you or never underestimate the value of sending cupcakes. So don't forget to include influencer marketing in the promotion of your content. In fact, you should think about influencer marketing before your content is even created so that you can get creative on how to include your influencers. Once an asset has published, ask your influencers to share, but make sure that you are creating valuable in a two-way relationship with them over time. 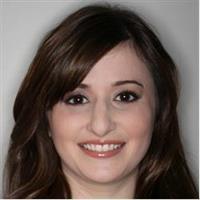 The course explores creating a content plan, choosing content types, and developing an editorial calendar. It also explains how to write, edit, and design content, as well as choose the right mix of content and curate it for maximum impact, and closes with tips on measuring the impact of your content marketing efforts.

This course is part of a Learning Path approved by the American Marketing Association.

Gain the skills you need to become an AMA Professional Certified Marketer (PCM) in Digital Marketing by using the industry-leading courses and resources in the Learning Path. Take the AMA certification exam to show that you have what it takes to lead the digital transformation.