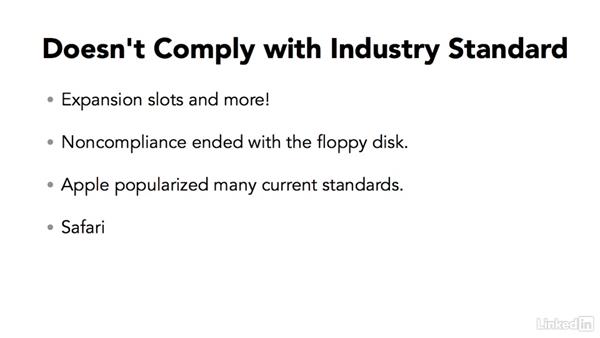 Mac computers can be mysterious to those who have never used one. There are many myths out there about high prices and limited software, so many Windows users never give the Mac a chance. This movie will demistify the Mac, and dispell many of the myths surrounding Mac computers to give you the understanding you need to make an informed decision about switching to a Mac.

- [Voiceover] Since this course is all about switching to the Mac from a Windows PC, in this lesson, we're going to explore the advantages to doing so while we explore a few myths that may have you feeling hesitant to switch right now. If you've already committed to the switch this movie should make you feel good about your decision. If you're still on the fence, this movie might just knock you off and into Mac territory. First thing, let's discuss some of the top reasons why people might be hesitant to switch to the Mac. One, Mac computers are too expensive.

Yes you can spend under $300 for a cheap Windows computer, but the keyword here is cheap. Most name brand PCs configured like a standard Mac, actually cost about the same. If you're more concerned about total cost of ownership and the quality of your computer as opposed to just the initial purchase price, the Mac wins hands down. Well how about this one? There's less software available for the Mac. True, some highly customized software applications are only written for Windows and you may have fewer choices for equivalents that run on the Mac, but there are thousands of software applications available for the Mac that met the needs of most users very well.

Think about Microsoft Office for example. At the time of this recording, Microsoft Office 2016 is available on the Mac and it's fully compatible with Office 2016 for Windows. This includes Word, Excel, PowerPoint, Outlook, and so on. If you do have Windows only programs that you can't live without, the Mac has a few options available to let you continue to use those programs on your Mac. Bootcamp for example, comes with every Mac and let's you boot up your Mac in Windows and use it like a Windows PC.

You can also choose to run Windows programs alongside your Mac apps with an application called Parallels Desktop, or VMWare Fusion. No restart is necessary when you install one of these apps along with your Windows installation disk. Also there are tons of great software applications that only run on the Mac. Mac OS 10 is based on the Unix platform, so many programs that run in a Unix or a Linux environment will also run on your Mac, but not on a Windows PC.

How about this? Mac's don't comply with industry standards and they're not expandable. Well not anymore, let's start with expandability. Although the high end Macs do have expansion slots, you rarely need them thanks to Firewire and USB ports that allow you to content devices without ever opening the box. Once upon a time, Mac floppy discs wouldn't run on a Windows PC, well that's where noncompliance with industry standards ended. Apple actually popularized industry standards like WiFi, wireless networking, and USB ports, and is compliant which such standards found in BlueTooth, PCI Express, Firewire, gigabit ethernet, and even Intel processor technologies just to name a few.

In fact, Apple's default web browser, known as Safari, available for Windows too by the way, complies with industry standards as well, or better than Microsoft's Internet Explorer. Okay, time to explore some of the advantages and disadvantages to moving to a Mac. Well, one stop shop. Think about Windows for a second. It has to be able to run on all kinds of PCs from all kinds of vendors. The people who make Mac OS 10, also make the computers it runs on.

This is called vertical integration and it means a huge benefit to customers who can now count on a reliable system as well as reliable service. If you have an issue with your computer or your operating system, you call Apple, one contact, and of course, they have a strong incentive to resolve the issue. There's no one else to blame. On the flip side, you have more options with Windows because it does run on all kinds of hardware from many different vendors. How about looks? Well Macs look cool and whether it's an iMac or an iPad, the people at Apple are serious about aesthetics.

This is proven by the numerous awards they've received for excellency in industrial design. With the Mac, function follows form and you can judge this book by it's cover. Of course vendors of Windows hardware are catching on and you can find some pretty cool looking Windows machines out there now. Quality design means keeping the important features and scraping the unnecessary junk. Easy on the eyes is nice, but easy to learn and easy to work with are the real goals here on the Mac designers.

Windows 7 followed in that vain and was more Mac-like than any previous release. Windows 10 adds even more in the way of look and feel. Let's talk about high quality products. Apple invests seriously in developing unique products that are superior to those that might be interchangeable with others sold by a bunch of different vendors. You get what you pay for. Paying a little more for a lot more functionality is what makes Apple the most profitable company in the industry, unit for unit.

They're innovative and compatible. Apple and Intel are partners and now most Macs use Intel processor chips. Watch for some new and unique innovations from Intel now that it doesn't rely solely on Microsoft Windows based computers and of course there's Microsoft Office. If you try Office 2016 on the Mac, you'll find it's more like the Windows version than ever. Making it very easy to transition from one to the other. Well, in all honesty, I was reluctant to switch to a Mac.

I was a victim of some of those misconceptions we just explored and I was simply unaware of the advantages. Really I was quite comfortable in my PC world using Windows. Little did I know how easy the switch to the Mac would actually be. I just needed a few fundamentals revealed to me and the rest was a breeze. That's what you can expect in the upcoming movies. Today I work on a Mac full time. Although I do use VMWare Fusion on this Mac to work in Windows 10 when I need to. It's really the best of both worlds.

I'll never forget my first day on a Mac. I turned the switch on and it was ready to use in seconds. That's right, seconds, not minutes of flashing screens and chugging hard drives. Seconds and that's how long it took for me to get hooked. Let's see how long it takes you.

4/5/2016
Make the switch from Windows to Mac. Learn about the similarities and differences between the two operating systems, including new terms that can be mystifying for first-time Mac owners. Author David Rivers explores the software—Mac OS X and its bundled applications—as well as important hardware differences: working with the Mac mouse and keyboard, interacting with gestures, and connecting to printers and cameras. The course also covers transferring files and email from a Windows 10 computer to a Mac, and installing new applications. David shares his top five favorite free apps and tips for adjusting the system preferences, so you get the most out of your Mac experience.
Topics include: