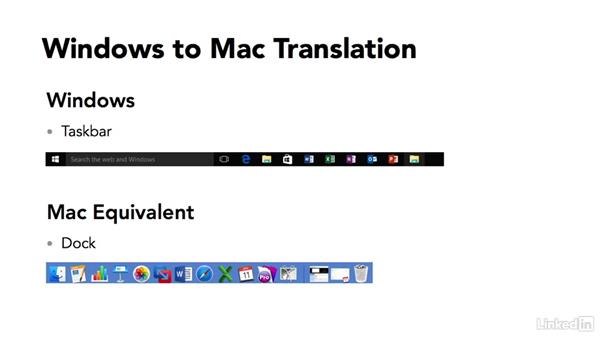 Windows computers and Mac computers have many feautures, functions, and tasks in common. In many instances, they may be performed in much the same way, although they are named differently. This movie will review terminology changes you will need to get accustomed to when using a Mac like you would in a Windows environment.

- [Voiceover] You'll find when switching from a Windows computer to a Mac that there are some differences, but there are also many similarities. Quite often, the differences are simply terminology. Things that you can do on a Windows computer you can do on a Mac, but it might be called something different. So we're going to go through some new terminology you should get used to when switching over to a Mac. We're going to begin with the Windows button that appears typically in the bottom lefthand corner of your Windows computer. In Windows 10 it looks like a small window icon and clicking it gives you access to all kinds of features and functions, search functionality, access to recent items, system preferences and so on.

Well on a Mac, you actually go to the top lefthand corner where you'll find the omnipresent Apple menu. No matter what application is up and running, you'll always see that Apple icon in the top lefthand corner which gives you access to similar functionality to the Windows button. On a Windows computer we use Windows Explorer to manage our drives, our folders, subfolders and files, we can go down the lefthand side navigating our computer, any drives that are attached, also network or drives that are online like onedrive, and we can do things with those folders and files like copy and move and delete.

Well, on a Mac it's called Finder, and Finder is always running in the background. You can open up many Finder windows that are similar to Windows Explorer with navigation down the lefthand side and then the contents revealed to the right with details if you want. And there is a toolbar across the top for working with selected items. On a Windows computer, we use Control Panel to get into our system settings for security, for programs, hardware, user accounts and so on.

On a Mac it's called System Preferences. When we open up system preferences, we see different categories like we do in control panel, icons for software and hardware and user accounts and so on. Its just named a little bit differently, system preferences. On a Windows PC, we have Program Files. Anything you install is called a program, it appears under the program files folder. On a Mac, they're called Applications, and applications can be revealed by clicking applications in a finder window on the lefthand side where you'll see a list of any applications that are installed.

The neat thing about a Mac is that if you want to uninstall an application you just go here to drag it from the window to the trash and just like deleting a file, it will uninstall the application. In Windows, you can have shortcuts on your desktop. These are icons that represent a program or a file, and double clicking it will launch the program or give you access to the file wherever it may reside. Shortcuts appear with a little arrow in the bottom lefthand corner to remind you that they are indeed shortcuts.

On the Mac, they're called Aliases, and they look similar with a little arrow in the bottom lefthand corner. Again, we can have aliases to programs, or even files that you use on a regular basis. In Windows, accross the bottom you'll find your taskbar. The taskbar includes the windows button in the left, search functionality, and then you'll see icons representing programs or files that you use on a regular basis. It's totally customizable, anything that's up and running appears shaded or highlighted with a line underneath.

Well, on a Mac it's called the Dock and by default, it too appears accross the bottom, totally customizable, we will be doing this later on in this course. You'll see shortcuts to applications you use, you'll also see dots under the ones that are up and running, and off to the right hand side is where you find that trash can as well as any applications that are up and running and minimized. In Windows, in the bottom righthand corner of the taskbar you find the Tray. You'll see a little arrow that gives you access to certain settings, these are shortcuts to things like speaker volume and keyboard settings, display settings as well.

The equivalent on the Mac are called menu extras, some people call them Menulets, and it's in the top righthand corner of the screen. You might see the speaker icon, date and time, you'll see the magnifying glass for searching, we'll get into that a little bit later, as well as the notifications icon by default, and just like in Windows, this is customizable. In a Windows computer, you'll have a windows folder somewhere on your hard drive. The windows folder gives you a number of sub folders for things that you can access under windows like fonts let's say, if you wanted to add or remove fonts.

The equivalent on the Mac is called the System Folder and in the system folder you'll see a similar list of sub folders like fonts if you wanted to go there to explore the fonts that are installed on your Mac computer. Also, we talked about this just briefly for a moment. On a Windows computer we have a recycle bin. When you delete things, they go to the recycle bin. So if you needed to, you could get them back. Anything you remove from the recycle bin is permanently deleted and a recycle bin that contains something appears like a trash can with crumpled up papers inside.

When it's empty, it does appear empty on the desktop. Well, the Mac equivalent is the trash can which appears on the dock and it works much the same as the recycle bin. Anything that you delete goes there temporarily until you permanently delete it from the trash. It'll appear with crumpled up papers inside if there's something in the trash can. It'll appear empty if there's nothing in it. The only difference, as I mentioned earlier, is if you wanted to uninstall an application, you drag it to the trash just like you would if you were deleting a file and it's uninstalled for you.

Also, on a Windows computer, there are a number of different ways to search. The search command can be found, for example, in Windows Explorer in the top righthand corner under the ribbon, you can go in there to search the contents of your computer, or you can use, right from the task bar accross the bottom in Windows 10, the search field that allows you to search not just your computer and Windows, but the web as well for files, meanings, for programs. On the Mac it's called Spotlight.

It appears in the top righthand corner and clicking that allows you to do the exact same thing. Search your computer and the web for files, for applications, for definitions for example. Inside the finder window down below, you'll find a search field as well, similar to what you'd find in Windows Explorer for searching the contents of whatever's selected, for example your hard drive or a specific folder. And lastly, when switching from Windows to a Mac, you'll need to get used to calling Properties, Get Info.

So, that's some of the new terminology you'll need to get used to when switching from Windows to a Mac. As you can see, the Mac does pretty much everything a Windows computer does, just might be named something different.

4/5/2016
Make the switch from Windows to Mac. Learn about the similarities and differences between the two operating systems, including new terms that can be mystifying for first-time Mac owners. Author David Rivers explores the software—Mac OS X and its bundled applications—as well as important hardware differences: working with the Mac mouse and keyboard, interacting with gestures, and connecting to printers and cameras. The course also covers transferring files and email from a Windows 10 computer to a Mac, and installing new applications. David shares his top five favorite free apps and tips for adjusting the system preferences, so you get the most out of your Mac experience.
Topics include: