What is a profile and why should I manage it? 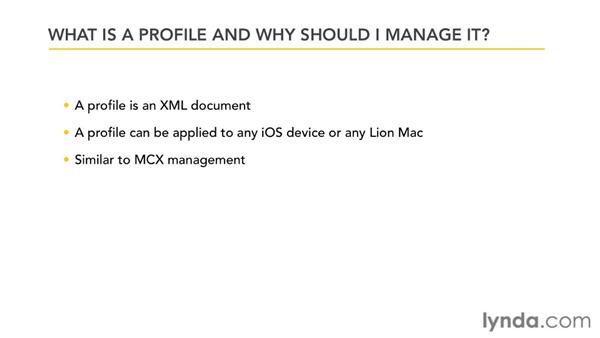 During a Keynote Address in 2011 Steve Jobs indicated that the Mac was going to be demoted to being just another device, just like an iOS device, like an iPad or an iPhone or an iPod Touch. He mentioned this in reference to a new thing called iCloud, but in fact, you can see evidence of this new strategy throughout many of Apple's new decisions. One of them is in managing devices by using something called Profiles, so what's a Profile.

A Profile is an XML document, written into a format that ends with a .mobileconfig extension. And essentially this XML document can be downloaded and can be applied to any iOS device or any Lion enabled computer. So this is any Mac that's new as of August of 2011 or any older Mac that's had the Lion installed on it. So we now have the ability to manage through Profiles. In the past we used to manage using MCX settings, and if you're an existing administrator, don't be alarmed.

MCX management is still allowed and it is supported. However, it has been deprecated, so it would be a good idea if you are an old hand at running MCX settings for you to learn the new Profile management way of the world, because that is definitely the direction everything is going. There are certainly some things that you can't do in Profile Management that you could've done before in MCX settings. But likewise, there are many, many things you can do now in Profile Management that were never possible in MCX. For example, we now have the ability to create and send out the new profiles completely automatically, once the system has been enrolled in what we call a Mobile Device Management System.

Lion server is the first version of OS X server to include Mobile Device Management, and it's rather a big deal. So what do we have? We have old MCX settings; we have new Profile Manager Settings. We have the ability to manage the Lion computers using Profiles; we also have the ability to manage iOS devices using Profiles. So let's spend some time now together exploring this brand-new feature of Lion Server and learning how best to utilize it in our environments.

10/7/2011
In this course, author Sean Colins shows how to configure a Lion Server installation, while highlighting its ease of use. The course gives an overview on servers: what they are, why they're necessary, and how to set them up quickly. It also covers file sharing, managing iOS devices with the new Profile Manager, and creating and sharing podcasts in Podcast Publisher, plus productivity services such as iCal, Address Book Server, and iChat Server, which keep shared calendars, contacts, and chat conversations securely in your possession.
Topics include:

Video: What is a profile and why should I manage it?