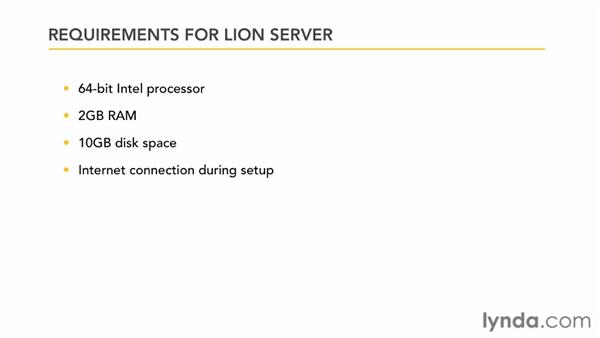 Apple has set prerequisites for the installation of Lion Server on a Mac. To begin, the Mac has to have a 64-bit Intel processor. This includes all of the Intel processor machines that Apple has shipped, except for the original Core Duo systems. If you have a Core 2 Duo processor, you'll be just fine. Anything after the Core 2 Duo will be fine as well. You need at least 2 Gigabytes of Random Access Memory or RAM, and at least 10 Gigabytes of disk space available.

However, you are setting up a server, so remember, if you're going to be setting up time machine to back up your client systems or file sharing, so people can put files on your server, mail, Web, virtually almost all of the services, you're going to need way more space than 10 Gigabytes. But those are the minimum requirements. You'll also need an Internet connection if you're installing Lion Server from the Mac App Store. You'll also need an Internet connection for validation of your hardware if you're reinstalling Mac OS X Lion on a system that shipped with it initially.

Now those are the minimum requirements for Lion Server, but let's talk about reality here. The 64-bit Intel processor, okay, that's fine. That includes Core 2 Duo machines and if you think about it, Core 2 Duo machines were made right up until we started shipping things like the new Mac mini Server with its i7 processor. So a Core 2 Duo is fine, but think about which machine you're putting your server on. An original white iMac with a Core 2 Duo processor had a 3-Gigabyte RAM limitation, so if you're about to do a profile management server that 3 Gigabytes of RAM, which could be the maximum for that computer, might not be enough.

So you want to give some thought to what services you're going to be installing on your server before you choose the machine that will be your server. I would recommend for profile management that you go with a minimum of 4 Gigabytes of RAM. For file sharing, two gigs might be just fine. But for a lot of things that are running scripts in the background on the server that are doing a lot of background work, a very fast CPU, a multi-core CPU something with four cores or virtual eight cores would be great.

4-gigs, I think would be a good minimum to go for. And if you're doing profile management, again, I would go for the fastest best processor you can get and I would go for the most RAM you can put into the machine you're using. I don't think it would be overkill at all to consider 8-gigs or 12-gigs of RAM even in a system of that type. All right! Let's move on to the next subject.

10/7/2011
In this course, author Sean Colins shows how to configure a Lion Server installation, while highlighting its ease of use. The course gives an overview on servers: what they are, why they're necessary, and how to set them up quickly. It also covers file sharing, managing iOS devices with the new Profile Manager, and creating and sharing podcasts in Podcast Publisher, plus productivity services such as iCal, Address Book Server, and iChat Server, which keep shared calendars, contacts, and chat conversations securely in your possession.
Topics include: