What are frequency and amplitude? 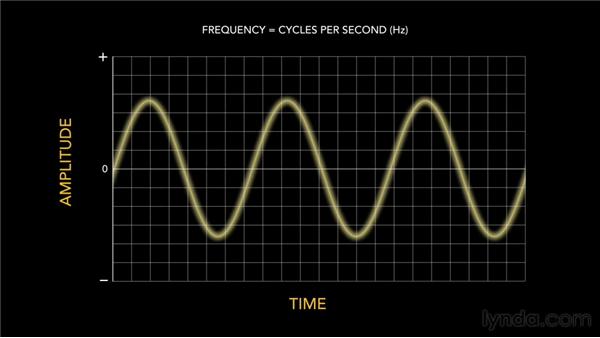 Join Brian Lee White for an in-depth discussion in this video What are frequency and amplitude?, part of Audio Foundations: EQ and Filters.

Before getting into the nuts and bolts of equalizers and filters, it's important to take a step back and examine some of the basics of sound. Sound is made up of waves of energy that oscillate back and forth through a medium. Usually the medium is air, but sound can also travel through solids like drywall or liquids like water. Soundwaves create an invisible push and pull of the air particles around us, and our ears perceive and translate these waves into nerve impulses that are sent to our brain.

For example, when you play music from your speakers, the speaker cone moves in and out, creating changes in the pressure of the air. The resulting soundwaves are picked up by our ears, and our brain translates them into sound information. Soundwaves are generally measured across two dimensions: frequency and amplitude. Frequency is the oscillation speed of the wave, or the rate of push and pull of air particles.

Likewise, when measuring the amplitude of a soundwave, we chart the amount of change in atmospheric pressure. When particles of air are packed together tightly, indicating higher pressure, we chart this push, or positive value on the graph, and it's called a compression. Pulls, or negative values on the graph where air particles are more spread out, are called rarefactions. The height of these compressions and rarefactions on the graph indicates the amplitude, which is directly proportional to the loudness of the sound perceived.

In other words, the greater the amplitude of a soundwave, the louder we will experience the sound. Later in this course, we'll move into the studio to work with frequency and amplitude using equalizers and filters.

Video: What are frequency and amplitude?