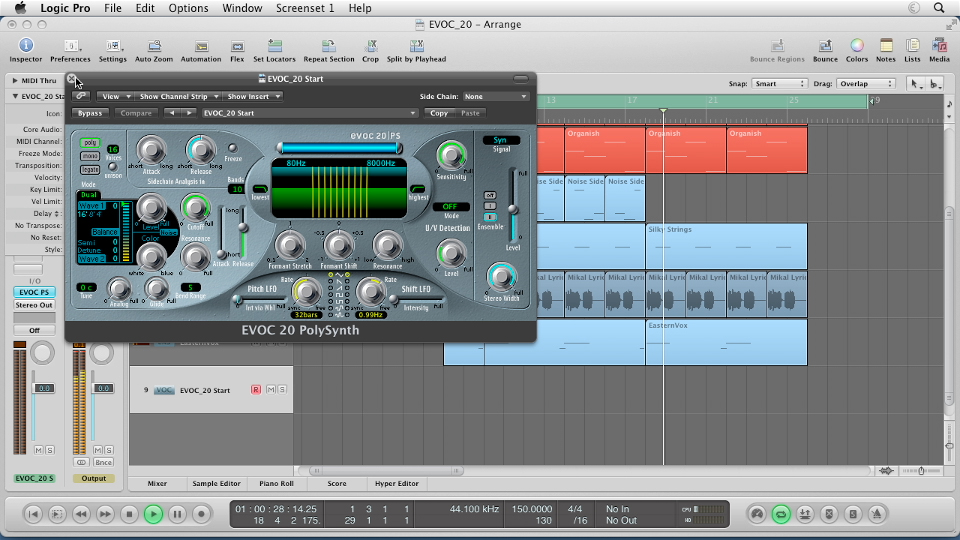 - [Voiceover] In this chapter, we'll take a look at the powerful Ultrabeat synthesizer. Ultrabeat is primarily designed for creating percussive sounds, but can also be used to create a wide range of synth tones. Ultrabeat combines many approaches to synthesis and has an extensive set of modulation features to create and shape the sounds. So let's take a look at the interface. There's three main sections here. There's the Assignment section. The Synthesizer section, and the Step Sequencer. The Assignment section, is basically where we're going to have all the sounds, so all 25 different drum voices.

And you can adjust the volume, and the panning, and the output. Mute and solo, and so on on so forth. Each different voice, it's kind of the organizational center of Ultrabeat. To the right we have the Synthesizer section. So we have two Oscillators. So Oscillator one, up top. And then Oscillator two, down at the bottom. And then we have a Noise Generator, in the center, and a Ring Modulator as well. So the signals from all of those, flow into this filter in this center. So it's a multimode filter. And it has a bit crusher and distortion that's attached to it.

So from the filter then the signal goes to the output or amplifier stage. So here where's you can control the volume, and we can add in two-band EQ. Modulate the pan and also, adjust the stereo spread as well. In terms of modulation features, we've got four envelopes, and two LFOs and these can be applied to almost any aspect of the Synthesizer section. Down at the bottom we have the Step Sequencer. And it can be used to create and edit rhythmic patterns. It can also be used to automate parameter offsets.

So each step in your sequence, can have different pitch, oscillator, filter and envelope settings. So it's really cool. So let's check out a musical example that has a number of different Ultrabeats that are creating both the percussion and the synth sounds, so you can hear what it sounds like. (Percussion and synth sounds) So now that we've taken a look at the interface to Ultrabeat, in the next video let's explore how we can play, organize, mix and import sounds using the Assignment section.

Video: Getting started with Ultrabeat