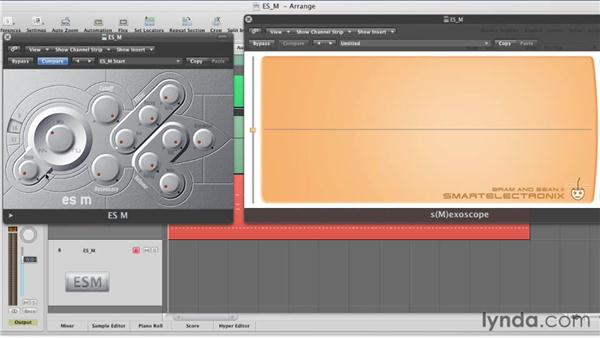 So let's take a look at the oscillator section. The first thing I'm going to want to do is actually change the setting here to a preset that is more neutral. When you open up ES M, or any of the other Logic instruments, the default preset sometimes has a lot going on. In this case, there's some filter modulation and so on. So what we're going to do is go to the Preset menu that's up top and select ES_M Start. If you didn't see ES_M Start in the Preset menu, make sure to refer back to the "Using the Exercise Files" video. I show you how to put preset files in the correct folders so they show up in the menu.

So you can hear the different harmonic components, and they sound different. And so it's a really important aspect of any sound you're going to make is, what is a waveform, and it's also something that you might want to have it change over time, or modulate is another term for that. So that's always what I'm thinking in the back of my mind is, what aspects are going to make this sound interesting? And so a big part of that is the waveform. The next thing in the oscillator section here that's important is choosing the octave. So you'll see on the left 8, 16, and 32.

What that refers to is 8 feet, 16 feet, and 32 feet. And that terminology comes from pipe organs. So the longer the pipe for the organ, the lower the pitch. So 8 is going to be the highest octave, so I can play that, 16 is an octave lower, and 32 is an octave below that. So once you've got your octave set, the other thing that you want to consider is the Glide parameter, which is down here. And what Glide does is it transitions between two different pitches.

So right now if I have a Glide time of 0--that's where it's set; I am going to have this all the way to the left here-- when I play two different notes-- I'll play A and then A an octave higher--that's instantaneous; that pitch change is immediate. If I want that to interpolate, or sort of glide between those two notes, I can set the amount of time in this control here. So if I set this in the middle, you'll hear that when I play-- I'll play the lower note-- (music playing) you can hear it glides into that higher octave. And the more time that I give it, the longer that transition takes.

So this will take some time, so I'll play the lower one. And now it's gliding up to the higher octave. (music playing) And that's what the Glide parameter does. And so once we've got our oscillator all set, it's going to send it to the low- pass filter, and that's where we'll shape the sound, so let's check that out in the next video.