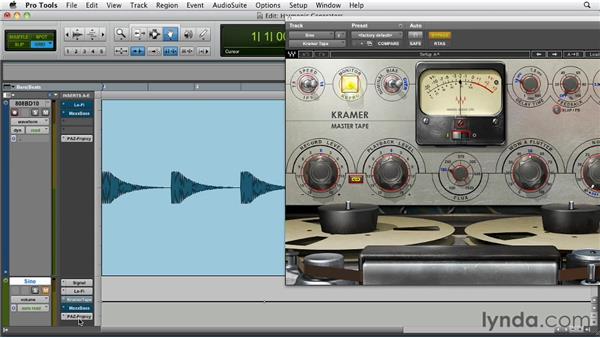 We learned that spectrum analyzers can be used to take a peek at the frequency content of a signal, but what happens if I boost a frequency range of a signal that just doesn't have any energy in it? Take a listen to this 808 kick drum and watch the output on the spectrum analyzer. Notice that there isn't much going on in the mid-range frequency space. (music playing) If you are listening on small speakers or even ear bud headphones, you might not even hear the kick drum, but you can see in the spectrum analyzer that there is indeed energy in the signal, way down below 100 Hz.

If you hadn't seen the spectrum plot, you might think, "No problem. I will just boost some of the low mids to fill out that 808 a little bit more." The problem with this strategy is that there isn't enough energy in that frequency range to support a boost. You can't boost what isn't there. Well, you can, but you're just going to bring up noise and unrelated nasty frequencies that you generally want to avoid. So what can we do? In scenarios like this where I want to give the ultra lows a little more mid-range extension so they fill out on smaller speakers a bit more, instead of using EQ, I will use harmonic generators to excite the harmonic series of the signal.

You see, I can tell by the FFT that this 808 is primarily a sine wave playing at a fundamental of around 60 Hz, without much harmonic content beyond that. To excite additional frequencies beyond the fundamental, I can use a few different techniques. Running the signal through some sort of distortion will usually drive the harmonic series fairly well, but this can quickly get out of control and start to destroy my ultra-low lows. Take a listen.

(music playing) To better illustrate what's going on here, let's look at a pure 60 Hz sine wave running through the same effect. Notice the additional harmonics pop up as I raise the distortion control. (music playing) Another technique is to use either tape or tube saturation.

Tape simulators can warm up the signal by driving the odd harmonics. Listen and watch that same low- frequency sine wave on the FFT as it passes through tape simulation. (music playing) Here my signal around 60 Hz is being driven at 3 times 60 and 5 times 60, or the odd harmonics.

I want to be aware that a lot of tape bias could start rolling off my ultra-low lows, which I may or may not want. In hip-hop and R&B I generally like a very clean low-end extension without the rolloff that tape usually imparts. But that's just my taste. A third technique to excite additional frequencies will be to use a dedicated harmonic generator like Waves' MaxxBass or Renaissance Bass. These tools are designed specifically to excite harmonic content from a signal in a cleaner, more controlled way than using distortion or tube and tape tricks.

Using MaxxBass I can raise or lower either the fundamental or the newly generated harmonics and blend to taste. I'll be sure to lower the input control to avoid any clipping. Take a listen. (music playing) Ultimately, I like to shoot for a balance between different listening systems.

In other words, I don't want to completely compromise a full frequency listening system by driving a ton of low-end harmonics for ear buds, and vice versa. Adding too much harmonic distortion can cause the low frequencies to become exaggerated on speaker systems with subwoofers or greater low-frequency extension. In the end, there isn't a single ideal way to add additional frequency content. Whether it's pure distortion, tube or tape saturation, or specialized harmonic generation tools, the technique you use depends largely on your specific goal and desired outcome.

I've shown you a few ways in which I approach the dilemma and will often try a few different approaches until I find what works best for each unique scenario I encounter.