Using the 3 envelopes to give shape to your sounds 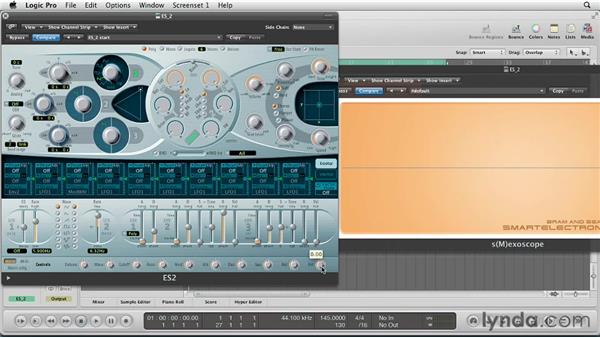 So let's take a look at the envelopes we've got here in ES2. So down in this modulation section, you can see there are three envelopes. So the third envelope is actually pre- wired to modulate the amplifier level, so it's going to control the shape of the volume of the sound. Envelope 2 and Envelope 1 are freely assignable, and we can use our modulation router to assign them to modulate various things. So to help us visualize the AMP envelope, I've got this oscilloscope open. This is the s(M)exoscope; it's one of the electronics that I have been using in some these videos.

So it's just a good way to visualize what's happening. It's a third party plug-in, so it's not part of Logic, but it's freeware, and feel free to check it out if you like it. So taking a look at Envelope 3, we've got some parameters that we're used to seeing, like Attack, Decay, Sustain, and Release. What's different is that we've got the Sustain Time parameter and a Velocity control here. So let's take a look just at the basic functions, the ADSR, and then we'll take a look at the new features. So attack is, remember, going to be the amount of time for our sound to fade in from silence to its maximum level.

So we've seen all that before in most of the other synthesizers and their AMP envelopes; however, what's a little bit different is this S-Time parameter. When it's in its neutral center position here, it doesn't affect anything. The sustain function works as normal. When I increase this, so I move this up, the sustain portion will rise back up to the initial level over the amount of time set here. So if I set this to 480 milliseconds then after the decay portion, the signal is going to fade back up to its initial level over 480 milliseconds.

Let's listen to that. (music playing) So if I make the decay shorter then that transition will happen quicker. (music playing) All right! So I can have a really short decay time. (music playing) And then the sound will just fade right back up. So it's kind of interesting. You get some interesting volume shapes with that. I can also use this in the opposite direction and have this fade down to silence. So in some ways it's going to act like a second level of decay. So I've got my normal decay that's here, some amount of time, and then I can quickly have this decay down to silence or just cut off instantly with this Fall parameter.

So it's going to go through the decay stage and then it's just going to fade out instantly. (music playing) So the sound just stops like that. So it's pretty neat. We can get some cool sounds and envelope shapes with this Rise and Fall parameter. One way we can make this AMP envelope respond to velocity is with this Velocity slider, because right now, it doesn't matter what volume or what intensity I play at, it's all the same level. So when I increase this velocity control, what that means is when I play softly, it sounds softly, and I play with force, and it plays louder.

So that's very cool. So let's take a look at Envelope 2. Envelope 2 notice has all the same features as Envelope 3. The only difference is this isn't pre-wired to anything. Typically, the second envelope that's full featured like this would be assigned to the filter cutoff in a lot of sense. So let's do that here. Let's assign Filter 2 Cutoff to be modulated by Envelope 2. So our target is going to be Filter 2, so let's set that here, and we'll choose Cutoff 2.

And then our source is Envelope 2, and that's already selected. If it wasn't, I could find it in this list here. And I only actually want to hear Filter 2, so I'm going to adjust our Filter Blend all the way to +1 so we're only hearing Filter 2. And then I'll up the modulation amount here, so we can actually hear this in action. (music playing) So right now we're actually not hearing anything. And the reason is because we have our cutoff on Filter 2 all the way open. So it has nowhere to go from there; it can't open up further than that.

So what I want to do to make this filter envelope effective is to set our Cutoff to the minimum level that I want, because then what's going to happen is over the attack portion, this filter will open up and then it will decay back down to whatever level that we have set here initially. (music playing) There we go! That sounds more like a filter envelope, doesn't it? So I can increase the intensity of that, and maybe we'll give some resonance to this filter to give it a little more character. (music playing) Okay.

Taking a look at Envelope 1, this is kind of a simplified envelope, but it can actually do a lot of things. So since we've already got our Filter modulation routing set up, let's replace Envelope 2 with Envelope 1 here. So now we have Envelope 1 modulating the filter cutoff. So what we've got is attack and decay, or if I press this D, it changes to release. So let's deal with it as decay. (music playing) That's just a simplified two-stage envelope, and I can adjust the attack.

And like we saw with the other envelopes, I can adjust velocity range for the attack stage. So if I play softly, it's a longer attack. If I play it with more force, it's a shorter attack. So it's a pretty cool way to make it more expressive. The other neat thing about this envelope is by default it's in polyphonic mode, and that's typical of most filter envelopes, and that means just I can play a bunch of different notes and each one is going to have its own filter envelope. If I set this to Mono, it kind of functions in a legato sort of way, where only really the first note I'm playing is going to trigger the filter envelope and then the following ones don't retrigger it, unless there's a space and time between them. (music playing) Right! So you can hear that envelope only happen once. (music playing) So that's Mono mode for an envelope and then this one also has a Retrig mode, which is pretty cool too.

So this means that any note I'm playing, it's going to retrigger the envelope. So if I play a C here, and I hold it down it goes through the envelope, but I'm still holding it. And I play a different note, it's going to retrigger the envelope for the new note and the original one that I'm holding down. (music playing) So it's kind of an interesting thing. So now that we've taken a look at these three envelopes and we understand how they work and know how to apply them, let's take a look at the specialized vector envelope and see what we can do with that.

Video: Using the 3 envelopes to give shape to your sounds