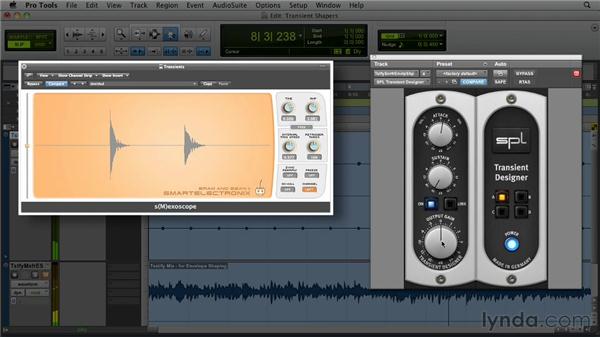 By harnessing the power of a compressor's attack and release controls, we can achieve some really cool envelope shaping on drum transients, helping to add punch and clarity inside a dense mix. However, envelope shaping with a compressor isn't ideal. While a compressor can draw out the transient's attack, it will also heavily compress the rest of the waveform, altering the decay of the signal in ways we may not want. Fortunately, we have another option. Enter the envelope shaper. This tool is designed to dry out the attack or sustain of a signal without affecting the other parts.

There are quite a few of these in the market now, but the secret weapon that most engineers associate with transient control is the SPL Transient Designer. The plug-in version I'm using here is modeled after the famous hardware version of the same name. This unit only has two simple controls, attack and sustain, allowing you to increase or decrease the attack or sustain portions of your signal without affecting the other half. Let's take a listen to this snare drum. As I increase and decrease the attack, listen as the bite of the snare comes and goes, and watch the corresponding output on the oscilloscope.

(music playing) Now, I'll increase and decrease the sustain. (music playing) In this example, the Transient Designer helps the snare have a little more bite in the mix without changing its overall tone or character, which a traditional compressor would tend to do.

Listen to the snare and the context of the mix, and notice how much bite it has when I add the SPL Transient Designer in the mix. (music playing) Using envelope detection, the Transient Designer identifies both the attack and sustain components of the signal portion, and either raises or lowers their level without adding any artifacts to the rest of the sound.

Think of it like selecting a piece of the snare drum's waveforms visually in your editor and automating its volume up or down. One of the coolest things about this tool is that it can work in the opposite direction. I can actually reduce the bite of a signal's transient to soften it up in the mix and make room for other things, or I can reduce the sustain of a ringing tom or kick drum that's clouding up my low end. While these tools are typically used on drums and other percussive material, get creative and try them on other signals, like spiking out a guitar or bass note.

You might be surprised at the result. These tricks are difficult, if not impossible, to do with just a pure compressor, so I'm glad these special processors exist, and now that you know how to use them, I think you'll find them especially helpful in your mixing workflow.