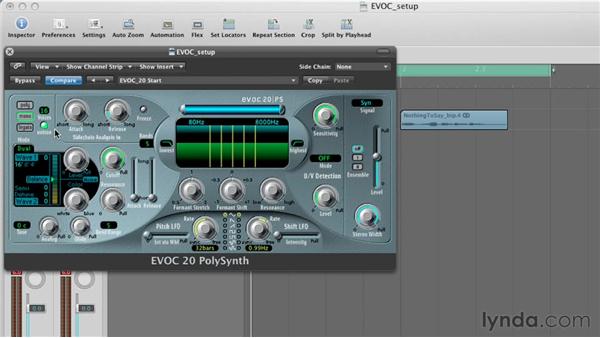 Let's take a look at the global voicing settings in EVOC 20. So we've got these up here: the polyphonic, mono, legato and unison. So these are going to really affect the way that the instrument performs, and unison is great for creating really thick, textured, layered sounds. So we'll take a look at that. So, in polyphonic mode, what this means is that you can play multiple notes at a time. And you set the number of voices you can play or the number of notes you can play right here. So the maximum is 16. That means you could play a 16-note chord, or 16 different notes basically all together, and you can adjust the polyphony here.

Then we've got monophonic mode. It's just going to allow us to play one note at a time. So you can't play chords. So if I try to play a chord, it just chooses one of those notes. But one of the neat side effects of mono mode is that if you play a note that's down here and I play an octave higher and then I let go of the higher octave, it goes back down to the lower octave. So I didn't actually have to play that note again. So you can do these paddling synth phrases like really easily in monophonic mode, which is really cool.

Then you have legato mode. And what's going to happen here is it's also going to be monophonic, but it's not going to retrigger your Attack Release envelope, when you're playing notes that are right next to each other in time. So what happens if I give this a long attack then the first note I play will take a long time for it to fade in, but then when I play adjacent notes without any pausing in between, I won't retrigger that envelope, so they will happen right away. So I'll play a note now. (music playing) So you can hear it fades in, and when I play other notes, they happen right away.

So it's not retriggering this envelope every time. So that's legato mode. So if I want to really thicken the sound, the thing to do is unison. So let's start in monophonic. So I'll press this button here to turn on unison. And what's going to happen is, depending on what our voice setting is here, it's going to stack that number, so 16 voices, on top of every note we are playing. So you have to imagine that you had 16 EVOC 20s open, all playing the same note, then you get this kind of sound. Also it's going to really increase the volume, because you get all these sounds on top of each other.

So if I play a note, we can hear that that was really loud and clipped. It's because we have 16 stacked voices. So I can bring this number down, something like 6, and you get a really loud thick sound. One way to make it more manageable and even appear as a bigger sound is to detune some of these unison voices. So the way to do that is this Analog control that's down here. What this is going to do is for each unison voice you'll get some amount of detuning. So obviously the further this is the left, the less detuning you get and the further you turn it to right, the more detuning.

So let's just have a little bit here. (music playing) I'll increase the amount. (music playing) All right! And so that you can get it really thick lead sounds by just having it in unison mode and using this Analog control to detune the unison voices. (music playing) So that's in monophonic mode. This also works in polyphonic mode, and what it's going to do is allows me to play chords. (music playing) And then I still have that detuning between voices.

Instead of stacking three voices onto every note that I'm playing, what it's actually doing is for any note I am playing, it's going to have one unison copy. And then this is where I set the maximum number of voices. And notice that instead of it going up to 16, like it did before, now it only goes up to 8, and that's because for every note that I'm playing it's playing a unison voice on top of it. (music playing) And if I wanted this to all be more in tune, I can make this less analog. So I'll bring down the Analog control here. (music playing) So you still get some of that texture of the detuning, but it's a little bit more manageable.

So that's how the unison voices work here. Another global feature that we have in the Synthesizer section is the Bender Range. So I can adjust the pitch bend range to go up to an octave in either direction, and then I can adjust the fine-tuning of the entire instrument by 50 cents in either direction. And so what that's going to do is if we have another synthesizer or some recorded live instrument that's slightly out of tune that we need to match, here we can adjust the global tuning of everything to make that all work. The global voice settings are really important for how the instrument is going to respond, both in terms of its polyphony and also creating the texture of the sound with the unison control.

In the next video, let's check out the vocoding features of EVOC 20.