Introducing and composing with the Klopfgeist 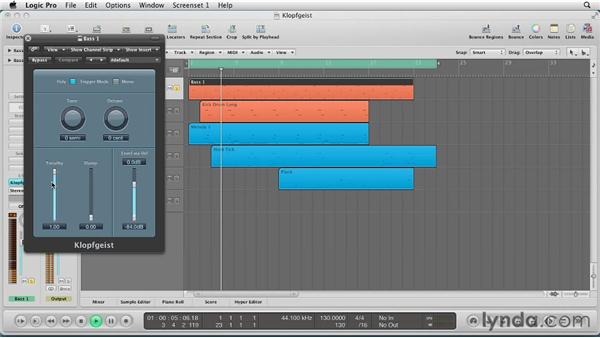 In this chapter we're going to explore the Klopfgeist. So Klopfgeist is the metronome in Logic. And so Klopfgeist in German means "knocking ghost" or "beating ghost." Klopfgeist is probably the most underrated instrument in Logic. You probably don't ever think about it, but anytime you open up a session, it's automatically instantiated on instrument channel 256. And so when you turn on your metronome, it's using Klopfgeist. Fortunately, Logic allows you to insert the Klopfgeist on any instrument channel so you can use it as like a musical instrument. If we take a look at the interface here, there's a couple parameters. So we have our polyphony up top, so it can be polyphonic, so up to four voices, or monophonic. Then we can adjust the tuning, and then we can adjust the tonality and damping. That has to do with the decay and release of it. And we can adjust the level. So right now we are in Poly mode, and so if I play, you can hear we have just a click. It kind of sounds like a metronome. But I can play multiple notes at once because it's polyphonic. So in order to hear this a little more let me increase the decay. So do that, I can up the tonality here.

(music playing) There we go. Now it's starting to sound like an instrument. So in Poly mode, you can hear I can play chords. In Mono mode I can just play one note at a time. Then we have our tuning controls here. So I can adjust in semitones. (music playing) So I can tune it up 48 semitones or down. (music playing) So you can hear I can get really deep bass notes, so this could be kind of neat as a bass sound. (music playing) And then I can adjust the fine-tuning as well, so I can detune it 50 cents in either direction. So we saw that tonality adjusted the decay and if I bring down the tonality, (music playing) it just becomes a short, little click. At zero that's just the tiniest impulse click. (music playing) So I'll bring up the tonality. Now the damp control, that's the damping. That's going to control our release time, so when I increase the damping, I have less release time. So when I let go of the note it cuts off immediately. So here we can adjust our level. (music playing) We can actually have a velocity range so you can see that this slider here is split, so I can move up the bottom. (music playing) Then velocity will control between this bottom part and the top part, in terms of the volume. So I'll set this back in the bottom and I'll set this back to its default, so I'm going to Option+Click. (music playing) You can hear, now we have a very playable instrument. So what I want to show you is a musical example where everything is made with Klopfgeist. So I'll play through it and then I'll talk you what's going on with the sounds. (music playing) So who would've guessed you can make music with a metronome? So there it is. So I'll show you this first sound here, so I'm going to solo this. And this is the bass notes. I just got the Klopfgeist. You can see you've got the tonality all the way up and the damping all the way down so it sustains. And then I'm just playing low notes on the keyboard. (music playing) So the next sound, it's called Kick Drum Long. And these sound like, to me, like 808 bass notes, so like really low just sustaining bass. And those work together with this Bass 1 part, so let's hear those two together. (music playing) So they work together. And if we take a look at this Kick Drum Long, just in terms of its settings, you can see it's very much the same as the other one. I have the tonality all the way up, or close to all the way up, and I have this detuned down two octaves. (music playing) So next what I have is this melody track. So I have a reverb on it and that kind of pushes it in the background. If I turn that off. (music playing) So it sounds much nicer with the reverb. It gives it a sense of space. And our Klopfgeist settings, well, we have our tonality all the way up, but a bit of damping so the release is shorter. (music playing) Next I have this Hard Tick setting, so let's hear what that sounds like.

(music playing) So it kind of sounds just like a metronome, but it's pitched. And I have a reverb on that as well, just a short reverb. So I can turn that off and you can hear that puts this way more upfront. So if you look at the MIDI part here, I kind of am doing some neat things, just in terms of, there's triplets in here. So I'm just trying to play with triplets against non-triplets, and you get this kind of polyrhythmic sort of thing happening that's kind of neat. And so the last instrument that we have here is the Klopfgeist as a pluck, and so let's hear what that sounds like.

(music playing) You can hear it's speeding up, but notice that my MIDI data I just have very sparse, so it's definitely one of the effects that's doing that. So what's creating that speeding-up sound is the Delay Designer. So you can see I have the delay is increasing in speed. So if I turn off the delay, and then I turn off the very short reverb I have, then it's going to be a very dry sound. Right, so it's very in-your- face. With the Delay Designer and Space Designer we have a really cool sound. (music playing) So then let me turn on the rest of these here. You can hear we actually have what almost is a piece of music. And so one of the neat things about this particular piece is because everything is made with Klopfgeist, if I actually turn on the metronome, I think it makes the piece better. So let's listen to it all in context one more time and this time with the metronome on.

Video: Introducing and composing with the Klopfgeist