Getting Started with Sculpture 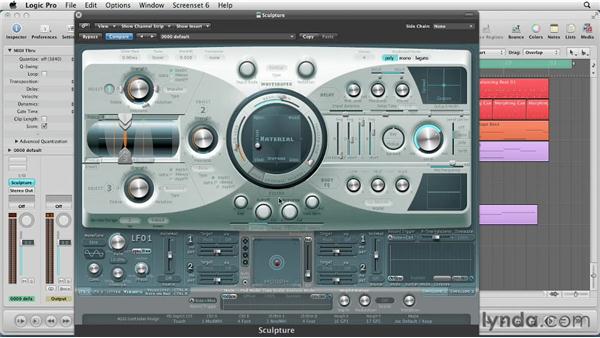 In this chapter we're going to explore the physical modeling synth in Logic Sculpture. Sculpture is my favorite instrument in Logic. It's capable of creating really rich, evolving textures and organic sounds that are both synthetic and surreal, all at the same time. So, it's very cool. Sculpture uses component modeling synthesis, which is also referred to as physical modeling, to generate sound. The physical modeling in Sculpture enables you to create virtual models of an acoustic instrument, such as violin, kalimba, or guitar, and you can model aspects such as the length of the neck, the material of the instrument, and material of the strings, even the size of the body.

In addition to the physical properties of the instrument, we can also determine how and where it's played. So, it could be softly bowed or plucked, and all kinds of other types of articulations as well. Sculpture functions differently than other synthesizers in that every aspect of sound generation and sound shaping interacts with everything else. So, in other words, small changes can sometimes completely alter the sound. At first, Sculpture can seem unpredictable and at times confusing, but it certainly rewards experimentation, and it's capable of creating some the most expressive synthesized sounds I can think of.

So, let's take a look at the interface of Sculpture. So, the top two thirds of the interface is the sound engine, and then beneath that we have the Modulation section, and we have our MIDI Controller assign section down at the very bottom. So, taking a look at the sound engine, the basis of our sound is going to be the string, so that's this green line here. And so can choose the material of the string right here with this Materials pad. And then we have three different objects. So, Object 1, 2, 3 and right now they're stacked on top of each other on the string, and they can be used to excite or disturb the vibration of the strings.

The whole sound-generation area is really happening right here. So, from there the sound goes to the Pickups. So, here's Pickup A, here's Pickup B and so there're much like electric guitar pickups in the sense that they pick up the string vibration, and from there it goes to the Amplifier envelope, so that's over here. The output of the Amplifier envelope then goes to the Waveshaper, so that's where you can saturate and distort the sound, add more harmonics, and from there the signal goes to the filter. So, here's where we can shape the sound by carving out harmonics and reducing certain frequencies.

After that, the signal goes to the delay, so here's the built-in delay, and then it goes to the Body EQ. Body EQ can mimic the resonant characteristics of a number of different instruments. The output of the Body EQ then goes to the Level control here in the amplifier section, and the last stage of the signal flow is the limiter. So, this just limits the dynamics and the output so you don't get clipping and things like that. So, in terms of modulation, we've got extensive modulation in Sculpture. So, there's two LFOs, a Jitter generator, vibrato, have Velocity controls, and we can use MIDI controls as well.

In the center, we have this Morph pad and Morph envelope, where we can seamlessly transition between different object settings and different material settings. It's very cool! Over to the right, we have a Control envelope where we can control the shape of the envelope using a MIDI controller, or it can function more like a normal envelope as well. So, now we've taken a quick tour of the interface of Sculpture. Let's listen to what Sculpture sounds like in action. So, I have a musical example here with several instances or Sculpture that are creating all the synth sounds and textures and so on.

So, let's listen to it. (music playing) So, as we can hear, there's a lot of cool sound-generation possibilities with Sculpture.

In the next video, let's explore how to adjust the physical characteristics of the string using the Material pad.

Video: Getting Started with Sculpture