Get in the Mix: Gating a drum track 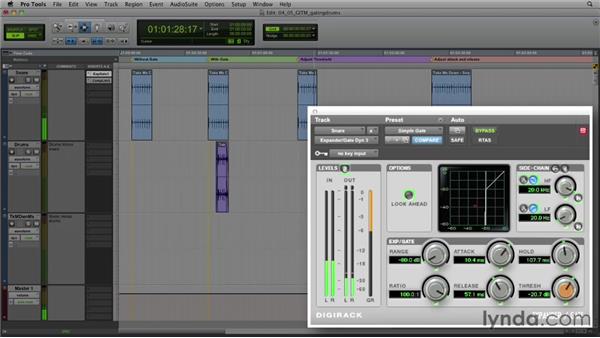 Join Brian Lee White for an in-depth discussion in this video Get in the Mix: Gating a drum track, part of Audio Foundations: Compression and Dynamic Processing.

Now that we know what a gate does and understand its controls, let's jump into an example of using a gate to clean up some live drum material. Listen to this ungated snare track. Pay attention to the bleed from the other pieces of the drum kit. In this case, I'll use a gate to reduce the bleed from the other drums that have a clean isolated snare signal, to further process the EQ and compression. Most of the time, I like to place my gates first in the signal chain, so I can get stuff I don't want out of the signal before passing it on to any other processing.

Now listen to the snare track with the gate engaged. Noticing the dramatic reduction in the bleed from the other drums. Notice when the rest of the drum tracks come in, the gate doesn't sound as dramatic. This is a good example of always checking things in context. It doesn't matter what it sounds like soloed. No one's going to hear the isolated parts when you release the final mix. Now listen as I adjust the gate from scratch. I'm going to begin by raising my threshold to a point where the signal that I want to keep, triggers the gate open, while the bleed remains gated.

This step will likely take a bit of tweaking, so take your time and, and check the threshold at various sections of the material. After finding a nice threshold setting, I can then begin to tune my attack and release times. As you may have heard, the attack is currently too slow, and is shaving off nearly all the transient or punch of the snare. Also, the release is so fast that it's choking off a lot of the decay. Instead, I want the gate to open quick enough so that the transient of my signal is not shaved off or softened. So we'll use a setting that is almost instant here.

For the release time, it really depends on how aggressive of a gated sound I'm looking for. In this case, I want to maintain some of the decay of the signal as to keep it sounding natural. But not so much that I pick up a ton of bleed after each strike. In scenarios that require aggressive gating, I can use a bit of short room reverb to add back a bit of artificial decay to the signal. Listen as I adjust the attack and release settings to get the sound that I want. In situations where you have a lot of intricate snare work, drags, roughs, and little ghost notes, it may not be possible to use a hard gate.

In this scenario, I usually have to make a decision to either embrace the bleed, or try using a lighter expander that retains some of the bleed. One track I like to use in this situation is to duplicate the track I'm working with. So I can hard gate one and do my extreme processing and isolation, but blend back in the ungated duplicate track to taste.

Video: Get in the Mix: Gating a drum track