Exploring the amplifier section and ADSR 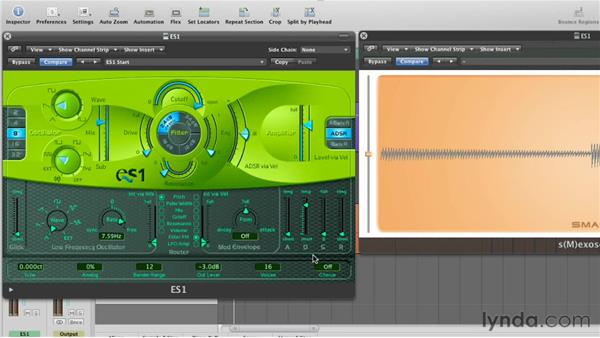 Let's take a look at the amplifier section in ES 1. So what we have got here--it looks very basic at first--is just a slider. So this controls the output level. (music playing) So it makes it louder or softer. But notice this slider splits. What this allows us to do is actually set a velocity range. So much like we saw with some of the earlier synths with ES M and ES E and ES P where they had velocity control, like a dial that you could adjust that would give it velocity sensitivity, it's exactly the same thing; it just gives you more fine-tuned adjustment.

So I can set an exact range that I want that the velocity will be. Instead of it being extremely quiet to full-on volume, I can set it something in the middle. So it's always going to be this minimum level and if I play really hard, it's going to be this maximum level that I have set here. So I can set a range here, and then I can play on my keyboard. You can see I can get the whole range of different velocities. So a really nice feature. It helps make playing more expressive and useful. Also one thing to keep in mind that this volume slider here that's in the amplifier works in conjunction with this output level.

This output level is the maximum this amplifier level slider can be. If this is set of -3.0 dB, that means when I have this all the way up, it's going to output at -3.0 dB. The next feature that we have in the amplifier here is this ADSR gate selection here. That refers to how this ADSR envelope down here is going to work. This ADSR envelope is attached to the amplifier and it shapes the volume of the sound. We have taken a look at some envelopes before, so this is much like the one that we looked at in ES P.

It's a four-stage envelope: Attack, Decay, Sustain, and Release. Let's first explore this envelope in each of the four stages, and then you can take a look at what these buttons do up here. So the attack stage, basically that's how long it takes for a sound to go from silence to its maximum level. Decay is amount of time, once it's reached that maximum level, how long does it take for the sound to fade down to whatever your sustain level is, or back down to silence, if your sustain is 0? Sustain is not an amount of time; it's actually level. So do I want full intensity here, or do I want it to be silent. And notice that in terms of the labeling of the sliders, that for the ones that are based on time, like attack and decay and release, the range is short to long.

And sustain, which is different, gives you the amount of 0 all the way to full. So that's how you can remember that there is something different about sustain is just take a look at how those are labeled. Now then the release is once you let go of the note, how long it takes for it to release, or fade down to silence. So let's explore each of these just while playing a sound. So right now the setting I have, the attack is instantaneous and so is the release, and the sustain is set at the full level. So as long as I am holding the note, it's going to sustain at that volume until I let go.

If I were to just adjust the attack, give us a longer attack time, the sound is going to fade in over this period of time. So you can see that happening on the oscilloscope. And so now let's check out the decay parameter. So to make things simple, I am going to sustain level and put it at 0. So right now I have got the instantaneous attack--it's really short. And I am going to make her decay time shorter too. So you can see what happened there is that the sound started immediately and then it fades out.

So let's see what that looks like. And actually, to make this a little bit easier, I am going to make our decay time shorter. So you can see this is the sustain level here. What I am actually going to do is capture this on the oscilloscope so we can just look at it. (music playing) So here we have got the attack, in the very beginning, and that happens right away, and the decay is the portion where you can see it reaches maximum level, and then it's fading down. And then it reaches this plateau where it just stays, and that's the sustain level.

If I make the release longer, it is going to be a longer fade-out. So holding down the note on the keyboard, and I will let go. You can hear it's slowly fading down. So that's how this ADSR envelope works, in terms of it being attached to the amplifier, but that's not the only more mode that it can work with the amplifier. So we have got these buttons up here, and these determine how this ADSR is going to work with the amplifier. So right now, it's set to ADSR. That means that all four stages of this envelope are active.

If I set this to AGateR, what that means is that the attack and release portion will be active, but it doesn't matter what my decay and sustain portions are set to; it won't be listening to those. So let's try that. So if I have my decay set at 0 and my sustain at 0 and I have sort of short attack and medium release, typically if we had this all four stages engaged, we really won't hear anything, because my decay is so short that the sound immediately decays. So in this AGateR mode or Attack Release mode, the attack is instantaneous and the release takes a moment.

So the decay and sustain, it doesn't matter. I am going to prove my point. We can move these around and it doesn't make any difference. So this one again, we have got all four stages active. This GateR, what that means is that only the release stage is active. So I can give this a very long attack where normally it would fade in, take a very long time to fade in. The sound is going to start instantly and let go, and it has a long release. So you might be wondering, well, why? Why wouldn't you always want this control? The thing that's interesting about this ADSR is that it can also be used to modulate the filter cutoff.

So what we can do is if you are making a sound and you decide okay, I don't really need to customize the decay and sustain portion of the sound because I know it's just going to sustain, you can set this envelope to AGateR, and then you could use the decay and sustain setting to modulate your filter cutoff. So we'd use that with this ADSR via Velocity, and that's what we will be exploring in the next video.