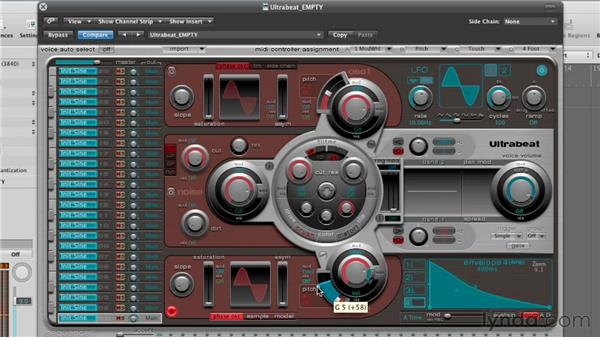 So let's take a look at how we can build a kick drum from scratch. So the main thing you want to think about when you're synthesizing any sound are what are its components? So a kick drum has a clicky portion, the attack of the sound, and then a boomy portion. We want to recreate both of those elements and then kind of tweak all of the envelopes and parameters and things to get it to sound just right. So the first thing I want to do is load up our initialize patch. So I'll go to the Load Setting Menu here, and then on Desktop/Exercise Files/Ultrabeat, and there in the Preset folder, we'll choose Ultrabeat_EMPTY.

And so I'll build the sound on the voice for C1. So I'll just turn up the volume a little bit, just the voice volume. What I'm going to do first is build the boomy portion of the sound, and then we'll build the click. So we have Oscillator 2 already on, so that's what I'm going to use. So for the boomy portion, it's going to be a pretty low-frequency. So you might actually, if you have headphones, put them on, or if you're listening on a full-range sound system, then that's helpful to you; otherwise it might be a little bit hard to here for a moment. So I'm going to tune this down to A 0. It's a pretty low note. So now we just have this low-sine-wave sound that's happening.

So to give this a little bit more definition and a little bit of punch, what I want to do is to put a pitch envelope on it. So what I'm going to do is use envelope 1 to modulate the pitch of this oscillator. So under this Modulation Menu right here I'm going to choose envelope 1, and first I'll set the range. So I want to set this 2 octaves. And so if you listen, you can hear the pitch dropping. And so to help us emphasize the attack portion of the sound, we want a pitch- change, but we want it much faster than it is right now, because this is a pretty slow pitch-change.

So what we need to do is make this envelope quite a bit shorter. So I'm going to use the Zoom to Fit for envelope 1 (Env1), and I'm going to set the Attack time to 0, and adjust the Decay to something shorter. Right now it's 420 milliseconds. Let's set this to something shorter. Okay. Here we go, around 160 seems good. And then I can tailor it further with the curvature of this here. So I'm going to adjust the Decay, have it bulge more towards the front here. So you can hear each little subtle adjustment in the envelope really makes a difference to the attack of the sound.

So you can spend literally hours tweaking. We won't do that here. (music playing) So that sounds pretty good! So that's going to be our pitch envelope. But still, it's not quite punchy enough, right? So we have the boom portion of the sound okay, but it's not quite there yet. So actually before we move on to making the click, let's adjust the volume setting for this oscillator. So I'm going to put an envelope on that as well. So I'm going to use envelope 4, which is already controlling our voice volume, to modulate the volume of Oscillator 2. So under this Modulation menu here, I'm going to select envelope 4, and what I'm going to do is just give it a little bit more range here.

So I'll adjust the amount here. And I want Velocity to scale that modulation. So basically this means that we'll have a little bit of Velocity control in terms of the volume of this kick drum. Okay. So that sounds all right, but I think I need to adjust this envelope. It's a little bit long right now. So I'm going to make the Attack shorter. And right now it's at 1000 milliseconds, but I think would sound better a little bit shorter. So let's pull this in. So I'm auditioning this. I'm playing the note while I'm dragging this, just to see where it seems right.

So that seems pretty good, close to 500 milliseconds, a little less, and then I'll just shape the Decay a bit. (music playing) Okay. So that sounds all right. So now I definitely need a click portion to this to make the attack stand out further. So there's a couple of different options. One, I could increase the amount of pitch modulation with the pitch envelope. So if I increase that, you can hear, it definitely gets more click, but it certainly sounds more synthetic. And aesthetically, I don't like that as much, so I like this more dull but still punchy pitch envelope that I have right now.

So to help with the click portion of the sound, or the attack, I'm going to use the noise generator. So I'm going to turn on the noise generator. And right now we'll have probably pretty long noisy sounds. So this isn't obviously what we want. I'll worry about the envelope a little bit. First I'm listening for just the color of the noise for this click sound. So I think what I'm going to do is use Band Pass here on this noise. And then I'm going to adjust the cutoff to somewhere where it sounds pretty good. I think that sounds good there. And we'll adjust the resonance as well. (music playing) All right! So that makes a very subtle difference, but good! And then this dirt parameter, which is like distortion on the noise. Maybe a bit of that, because we're going to have a really short envelope, so it's okay to have a pretty dirty sound.

So that's kind of a lot of click, but for certain contexts of music and certain electronic music and things, sometimes you want a really punchy attack. If you need less, you can bring down the intensity of envelope 2 here, and you can hear I get less click with that. So I kind of like a bit of it. I think it sounds pretty good. I tend to like punchy kicks. So then the next step would be to add a bit of EQ to just get this to be a little bit more focused and bigger. So I think what I'm going to do is we'll use band 1 of EQ, and we're going to use a low shelf. And I'm going to increase the resonance here, and then I'll just pull this down.

So I'm going to be cutting out the lowest frequencies. So I'm going to move this down to actually 32 hertz here. But notice when I adjust this Q here, it creates a little bump right here. So what I'm getting rid of is the lowest, lowest frequencies, basically 32 hertz and below, which is like subsonic sound essentially, and bringing out the upper low end, so 80 hertz and that sort of area, where it's really going to resonate. It's one of those things that's always an issue of taste, and you can adjust to get it just right. (music playing) That sounds pretty good like that, and so I think there we go.

As a kick drum, the last thing I want to do is add a little bit of Velocity control to our voice volume, just so it's a little bit more responsive. So under this Via Menu here, I'm going to select Velocity, and then we'll just bring this down a little bit, so we've got a range with this. And there we go. Now we've got a pretty decent-sounding kick drum. And the last thing I want to show you about this is, once you have sort of a template for your kick drum like this, then you can adjust things like Saturation. So if you want more of an electronic kick, I can increase the Saturation.

Also, even the pitch range makes a huge difference too. So right now I'm at A 0, but if I increase the pitch, so I bring this up, it's more of like a tom drum, like a synthetic tom obviously. And if I bring this even lower, like down to D 0, I get more of a really deep kick. In some ways it sounds a little bit more realistic, especially if I get rid of this Saturation. It sounds like an acoustic kick drum.

So depending on where you have the pitch and things like that, you can make a lot of different changes in the characteristic of your kick drum. So now that we've explored some possibilities of how to make a kick drum. In the next video let's explore how we can synthesize a snare drum from scratch.