Adding movement with the LFO 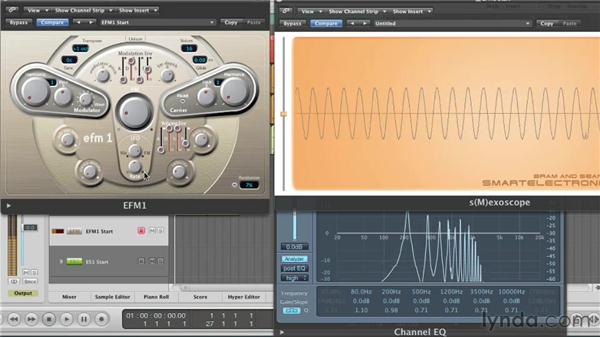 The LFO in EFM1 could be used both to modulate the FM intensity and as we saw earlier, it can be used to modulate the pitch to create a vibrato effect. Just as a reminder, LFO, that stands for Low-Frequency Oscillator. So it's an oscillator that generates a periodic signal like oscillators do, but instead of it being an audible signal, it's one that automates the movement of some parameter. So in this case, we can modulate the FM intensity, if I move this control to the right. Remember, the FM intensity is this knob here in the center. Or if I move this to the left, it's going to be a pitch modulation, and therefore create a vibrato effect.

In the center, this LFO isn't active. So to reset this to the center position, I can click on the O above the knob or I can just Option+Click on it, and it moves it back the center. So right now I'll play the notes so you can hear where we are starting. (music playing) Okay, so there's a little bit of FM modulation happening, and we have got the Modulation envelope with some activity going on. Let's bring in the LFO amount for FM intensity. (music playing) So now I have got a little bit of modulation and as I increase the amount, you can hear it's a more pronounced effect. (music playing) And I can adjust the speed of that here with the Rate control.

(music playing) If I want to do a long change, I can set it to slow rate, or I can speed it up. If I go really fast, I get sort of distorted overdriven sound. But the problem is is that even if it works for one note, it doesn't necessarily mean it is going to sound good on every note. So this doesn't really track pitch too well. (music playing) As we looked at earlier too, if we take this to the left, we'll get vibrato.

(music playing) Sometimes with vibrato effect it's nice to have just a small amount. (music playing) Because then it's more of a subtle effect and has more of a nostalgic sound. (music playing) It's pretty out of control. So as you can see, the LFO is a great way to add a more periodic type of modulation that's constant to the sound, whereas the envelope is great for doing like a one-time modulation where the FM intensity is adjusted or the modulator pitch is adjusted.

The LFO is really great because it's a continuous modulation, so it's a way to add consistent movement to the sound. Next, let's take a look at how we can add more bass with sub oscillator and thicken the sound with the stereo de-tune in Unison.

Video: Adding movement with the LFO