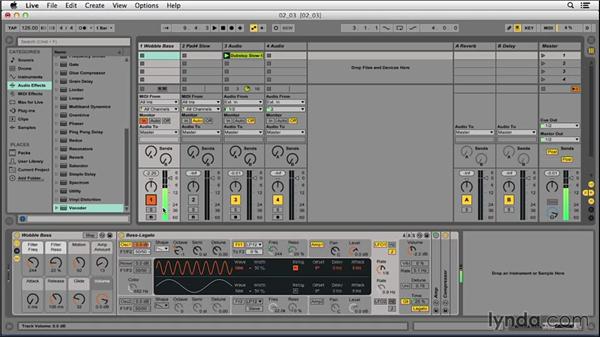 Join Scott Hirsch for an in-depth discussion in this video Vocoding techniques, part of Learning Synth Programming: Beyond the Basics.

- When we hear the word vocoding, most of us think about that classic talk box effect you might hear in a Craftwork record, or a Giorgio Moroder song. I love that sound, and we've got a tutorial on how to do that also in this course. But there's so much more to vocoding then transforming a human voice. In this movie, I'll show you how to set up vocoding in Ableton Live for some other awesome effects. So what does a vocoder do, exactly? Vocoding works by identifying all the spectral information of a sound, and how it moves over time, minus the sound itself.

For example, here's a drumbeat, and I'm using a spectrum analyzer to visualize the frequency spectrum over time. It's also called the formant envelope. (drumbeat) We see that formant envelope in orange. (drumbeat) Now if I was to turn off the sound, I could still see the envelope, and I can take this information and use it to control another sound source. The frequencies are broken up into several bands. And the vocoder identifies and measures the energy happening at each band.

This information is then superimposed on another sound. And this way we can play a chord on a synth, and make it's envelope follow the motion of, for example, a drumbeat. It's like applying an envelope to a sound, only the envelope is much more intelligent and constantly moving. So let's set this up in Ableton Live. I'm gonna first remove this spectrum analyzer, and on the same track where the drums were I'm gonna insert a vocoder. Vocoders in Ableton Live go on audio tracks, and they're considered audio effects.

So here's the vocoder plug-in. On the left you see the carrier. The carrier is the sound we're applying the formant envelope information to. The drums on the track provide the information. Now at first, the vocoder is set to set up as noise for the carrier. So, it's not actually taking sound from anywhere else, it's just got it's own internal noise generator. And when we hit play, it'll use this noise as a carrier, and the drums will be modulating the noise. Let's hear what this sounds like.

Turn the track on. (drumbeat) So it actually sounds a lot like the original drums, but what we're actually hearing is just the noise. And it has these frequency bands, so I can actually carve out different shaves. (drumbeat) If I wanted to hear just the high end of the noise being triggered by the high end of the drums, I can do that, or I can do the same with just the low end. (low drumbeat) You can also do some cool things by dialing up the release to make it ring out a little more.

(drumbeats ringing) It starts to sound more like real noise, right, not just drums. (drumbeat) And the other cool thing is we have this dry/wet knob, and I can dial that back and I'll start to actually introduce some of the original drum sound, along with the vocoded noise. (drumbeats) If I go 100 percent dry, just the original drums, right? And here is some of the drums with some of the noise. (drumbeats) So that could be a really cool effect if you wanted to just bring out some of the high end energy of drums with some noise, you can vocode with the noise carrier.

But the real fun in vocoding begins when you vocode from an external source as the carrier. So let's set that up. I'm gonna go back to a flat EQ, and I'll dial the release back, go 100 percent wet, and now over here, on track one, I have a wobble bass synthesizer, it's using the analog synthesizer in Live. And if I turn the monitor to in, I can play some notes on my midi keyboard, we can hear what this sounds like. Turn the track on. (piano playing) Go down an octave.

(lower notes playing) Okay, so that's the actual sound of the synthesizer. But we're not gonna be hearing that, we're gonna be hearing that sound being vocoded through the vocoder. So back to the vocoder track, I'll actually turn the output of that original track off, and on the vocoder track, I'll change the carrier from noise to external. And when we go external, it asks us where we want to come take the audio from.

In this case, we're gonna choose that wobble bass track. So now, I'm playing the bass, but we're not hearing anything, because we haven't started the drums yet. So if I go ahead and start the drums playing, we don't hear anything yet either until I start playing some notes. (drumbeats and piano playing) There it is. So now, the sound from the wobble bass synth is being vocoded by the drums. I can play some different notes. (drumbeats and piano playing) Turn it down a little bit by EQing.

(lower notes playing) I'm just playing some different notes on the keyboard. I can change the release time. (drums and piano alternating playing) So I can also go into where it says bands, and I can change this to lower bands, this kind of can catch a little bit more of a classic sound, to be able to just sort of dumb it down a little bit in terms of what it's listening to.

(drumbeats and piano playing) So this is a really great way to get your bass to lock in with the drums. If you vocode the bass by the drum sound, then the bass will always be in rhythm with the drums. And you can take out some of the high frequency noises. (drumbeats and piano playing) So that's an example of using bass with vocoder. Now I want to show you one more thing, and that is to turn this one off, and I'll stop the playback for a second.

And over here, I've got a synth pad, so if I turn this on, and set the input monitor, you hear what this sounds like if I play some notes on this synth pad. (electronic notes playing) Right, so it's just a slow moving pad. Go up an octave. (higher electronic notes playing) So, even though this is a slow moving pad, again turn the track off, go back to the vocoder, and instead of choosing audio from wobble bass I'll change it from to the pad track.

And now, again, the envelope will not be slow and long like we heard in the original track, because the drums are gonna be vocoding it. So, start the drums going, set the EQ a little bit, and I'll start playing some synth pad chords. (electronic chords playing) So I can set the release higher, get it to ring out a little more if I want. (electronic notes ringing) I'm just playing these chords on the midi keyboard, and they can even bring some of the drums back in with the dry/wet knob.

You thought it was a one-trick pony, but now you have some new ideas to expand on. And as you've seen, it can be a really musical tool in your arsenal going forward.

9/5/2014
Up your levels. Move beyond the basics of sound synthesis, in this course with musician Scott Hirsch. These advanced tutorials explore the inner workings of familiar synth programming techniques, as well as a few alternatives for pushing your sound further. Scott builds from modular-component synthesis to other types of synthesis, including frequency-modulation (FM) synthesis, modeling synthesis, and vocoding techniques. The course finishes up with a series of tutorials on creating new sounds, including a classic vocoder effect, big moving basslines, evocative percussion patterns, and rich synth pads.

Note: Scott uses a combination of Ableton Live, Native Instruments software, and Logic Pro in these movies, but you can easily re-create the techniques in the DAW of your choice. The specific synths used include Native Instruments Massive; Logic's ES2, EFM1, and Sculpture plugins, and the EVOC 20 PS vocoder synth; and Ableton Live's Collision and Operator.