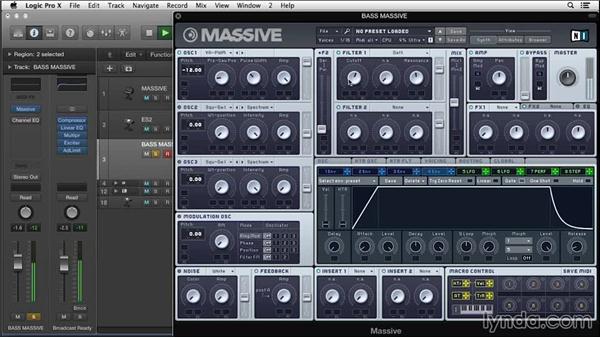 When it comes to synth bass sounds, a lot of composers look for some movement in the bass tone. You can call it wobble bass, dubstep bass whatever you want. In this movie I'll show you some methods to get these types of tones. We'll stick with Native Instruments' Massive to stay in our modular synth world. But as you'll see, these techniques could apply to any synth. So here in our Logic project, I have a bass track, and it's loaded up with the Massive synth. Right now it's in the default settings, so it's not going to sound that good. I'll play the project for a second and we'll hear the synth pads we created with Massive and ES2, and then we'll hear the bass come in.

(musical tones) There's the bass. We'll solo it up. (bass tones) So as you hear, it's a little anemic for a bass tone, right? Let me set the loop to start where the bass starts, and I'll pull Massive up so we can get to work in it. So first and foremost, we need to set up the overall amplitude of the instrument.

Remember, Massive's overall amplitude envelope is controlled by envelope four, and as you can see here in the amp module, there's a little number four, which directs us to this envelope here. By default, this envelope has a quick attack, but then it falls off a little bit on the decay. So to create more of a solid bass tone, I'm going to turn the decay level up, so it just remains loud throughout the length of the entire note. And it won't sound that much different, but as we introduce some more tones to the sound, it'll become apparent that we want this solid type of note for our bass tone.

Let's hear what this sounds like. (bass tones) Okay, great. So now we'll choose a wave table oscillator that will be appropriate for a bass tone. You can see right now we're hearing oscillator one, two and three are on and the noise is on, we can actually turn everything off. All we need to make this bass tone is one oscillator. But instead of using the square saw wave, I'm going to go over to the PWM pulse saw wave.

Whenever you see PWM, it stands for pulse width modulation. It actually allows you to change the width of the waveform itself. You can actually make it more asymmetrical with the pulse opposition, but more importantly the pulse width knob in this case, shows up when you choose the pulse saw PWM waveform. And this allows you to change the shape of the actual waveform. And that's going to be crucial part of this sound. So let me play it and I'll just move that around and we can hear what it's doing. (musical tones) You can move the position as well.

(musical tones) So you can hear, you can subtly change the tonality of the sound, it's not changing the pitch, but the overall frequency buildup and harmonics involved in the sound itself. Okay now one other thing I want to do because this is a bass tone, is pitch it down an octave. So I'm going to go down to minus 12, just 12 semitones below the normal area, and that will give us an octave below. And then we'll really dial in the pulse width and the position of the waveform to sound fat.

(musical bass tones) Alright, that's sounding a little bit more like a bass, isn't it? Next I'll set the oscillator all the way to feed into filter one. Remember we can change which filter the osciallator is going into with this slider here. So I'm going to go all the way up to filter one, and on filter one, I'm going to introduce a filter. I'm going to choose the daft filter, which I'm guessing is named after synth heroes Daft Punk. So we'll set the cutoff, and we'll dial a little resonance into the sound.

(musical bass tones) So, as you can hear, you can get some great effects by changing the cutoff filter. And that's going to be also part of the sound we end up creating. You can also turn the filter all the way up with this slider. This is the overall level of the filter, and I like to just crank that to get some more bigger sound. (musical bass tones) Okay great, so I'll leave the cutoff at that point.

Now let's get the movement going. Let's assign an LFO to that cutoff parameter so we can automate what I was just manually doing. So I'll go to the first available LFO, LFO five, and I'll drag the little crosshairs to that cutoff parameter and then I'll click and drag on the number five to give it some nice range. Let's hear what that sounds like. (musical bass tones) Cool, we're getting that nice movement. Now we want to actually sync up the rate of that LFO.

So back in the LFO panel, I'll click on the sync button and we can choose a ratio. Let's do a one over 12, which will give us a nice, sort of three against four feel against the beat of the song. Now also in the LFO area, we have an amplitude knob, which controls how much the LFO is being applied. So as I play it in the song, I can increase or decrease the amount of LFO that's applied to the cutoff filter. Let's hear what that sounds like. (musical bass tones) Very cool, so that's our awesome wobble bass sound.

And let's hear it in the track with the other instruments. (musical tones) It's nice when the drums come in and we just get to that point in the song. (musical tones) So the way we've set this up, we can control the amplitude and that gives us the wobble effect. And we'd like to have that come in and out.

So it would be nice to actually map that to a parameter we can control and even record into our Logic project. Then on the bottom right we have the macro controls. These are macro knobs that you can assign to any parameters. So if I go over to macro control one, and drag that to the amp knob in our LFO, I can then set a range for how much I want to control the LFO, just like I did with the LFO. You just click and drag on the number one and give it a range.

Actually I'll start lower, and get the whole range. Now, if I right-click on macro number one, it says that it's connected to MIDI CCID 1, MIDI controller one, and on most keyboards if not all MIDI keyboards, MIDI controller one is actually already mapped to your mod wheel. So, macro one is assigned to our mod wheel. And now when I play the song, I can just spin the mod wheel on my connected MIDI keyboard and control the amount of wobble to this cool bass sound we made.

As I'm doing now. (musical tones) Now one other thing that might be nice is to control, remember earlier I said that the pulse width is another way to alter the sound. And we can do one of two things, we can actually assign LFO to the pulse width, hear what that might sound like. (musical tones) It's just adding a little bit of richness as I increase the mod knob. Or we could actually just map it directly to mod controller.

That might be another way to do it. (musical tones) I like that. So as it reaches the top pinnacle of the wobble, it gets a little bit of a changed wave shape. So there's a few ideas to go off when you're ready to program your bass tones. Good practice would be try to create this same sound on your own on some other synths, like Logic ES2 for example.

9/5/2014
Up your levels. Move beyond the basics of sound synthesis, in this course with musician Scott Hirsch. These advanced tutorials explore the inner workings of familiar synth programming techniques, as well as a few alternatives for pushing your sound further. Scott builds from modular-component synthesis to other types of synthesis, including frequency-modulation (FM) synthesis, modeling synthesis, and vocoding techniques. The course finishes up with a series of tutorials on creating new sounds, including a classic vocoder effect, big moving basslines, evocative percussion patterns, and rich synth pads.

Note: Scott uses a combination of Ableton Live, Native Instruments software, and Logic Pro in these movies, but you can easily re-create the techniques in the DAW of your choice. The specific synths used include Native Instruments Massive; Logic's ES2, EFM1, and Sculpture plugins, and the EVOC 20 PS vocoder synth; and Ableton Live's Collision and Operator.