Using what you know about Linux 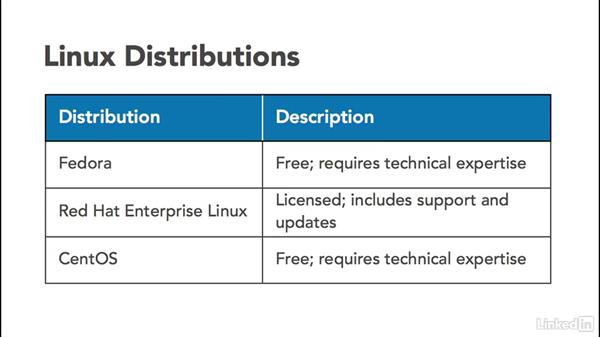 In this movie, Sandra will show you how to use some of your existing knowledge within Red Hat Enterprise Linux.

- [Narrator] In this video, Red Hat Enterprise Linux Basics: Using What You Know about Linux, we'll review information about Linux operating systems in general. Linux is an operating system, so like other operating systems that you probably used, it's basically just software that communicates between the hardware elements of your system. Linus Torvalds, from University of Helsinki, created Linux based on Unix, and released it in the 1990s. Torvalds wanted to allow for the development community to be able to add programs and crowd source applications.

They can also be used to manage enterprise information systems. Linux comes in various distributions, or distros, for short. Each distro is a kernel packaged with a specific collection of applications and software utilities. The subtle difference is, in the distros, reflect the capabilities or requirements of a niche community of users. Let's look at the example of the fervid video game user community, which is traditionally had a hard time using Linux alone as a platform to play games. There's now a specific distro called Steam OS that was developed for the custom specifications this group needs so they can have a gaming platform on Linux.

Generally, Linux distributions can be downloaded for free, burned onto portable storage, and installed on any device. A typical Linux distribution comes with a Linux kernel, tools and libraries, applications, additional software, documentation, and a desktop environment. In this video, we'll focus on Red Hat Enterprise Linux. In addition to the typical Linux bundle, this enterprise version comes with a license support relationship, and Red Hat sponsored updates. If you don't intend to use a support license, Red Hat Enterprise Linux may not be the best distro for your needs.

With so many distributions to pick from, a lot of people are confused about how they relate to each other. Are they the same company? Is one a derivative of another? Let's take a closer look at three popular distributions - Fedora, Red Hat, and CentOS. Fedora is a company-run distro offered by Red Hat, focused on quick releases of new features and functionalities. Fedora is free, and it is sponsored by Red Hat, the company, but it's actively developed by a community of developers, in this case, Red Hat developers, for the most part.

It's best for developers and admins with good researching skills because it doesn't require license support. Then we have Red Hat Enterprise Linux. It's the enterprise version of the operating system based on the progress in the Fedora project. It has slower releases and comes with support, which isn't free. In fact, in order to have access to the updates and releases, you must have an active subscription. Red Hat Enterprise Linux takes technologies developed via the Fedora project, and packages them into a reliable and more stable commercial product.

Red Hat Enterprise Linux is better for an enterprise environment, or any commercial services that are going to be in production and needs stability. Finally, let's talk about CentOS. CentOS is the community run version of the enterprise operating system. It's pretty much identical, but it's free. Patches and updates come from the community, as opposed to Red Hat, the company. Similar to Fedora, it can take time to research a solution, or even wait for the community to develop a solution or resolve a problem.

There's so many distributions. How do you figure out what distribution to work with? The criteria you come up with should reflect what you need to do and who will be using it. You're gonna wanna ask yourself questions, like what is it for? Am I planning for a commercial or non-commercial use? Do I have a budget? Is my main focus for the operating system security, usability, portability, or stability? What device am I going to run the operating system on? Does it need to be supported on multiple types of hardware, or platform specific? What am I gonna use the operating system for? Will it be general purpose? Am I using it for monitoring or computer forensics? You're also gonna wanna look at who is it for.

What level of technical acuity does the user need to have? Am I going to need to address the needs of the geographically dispersed user base? And do users rely heavily on media exchange, or the use of the latest tool sets? In this video, we talked about Linux in general. In the next video, we'll take a look at some introductory information specifically about Red Hat Enterprise Linux.

Video: Using what you know about Linux