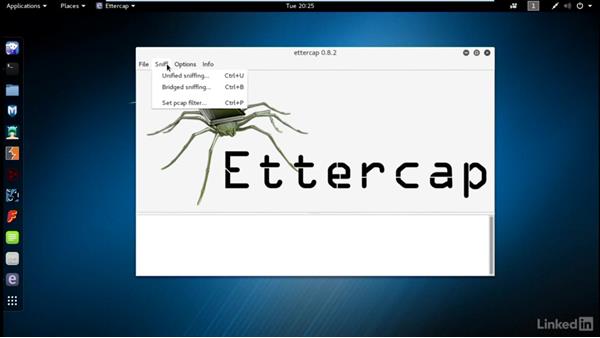 Use Ettercap to launch an ARP poisoning attack, which sends spoofed ARP messages on a local area network to poison the ARP cache to be in a man-in-the-middle.

- [Voiceover] Ettercap is a tool in Kali Linux.…It's used for a man-in-the-middle attack.…You can use Ettercap for an ARP poison attack,…and then later launch another attack.…There's a few things you'll wanna do…before you set up and launch Ettercap.…First, find the IP address of the router and the victim,…log in Kali as root, and then…open a terminal and enable IP forwarding.…This is going to be important…in order for the victim to maintain connection…while we're doing the ARP poison attack.…

To use Ettercap for an ARP poison,…we'll wanna get in Kali Linux.…We'll log in to Kali Linux as a root user,…and I'll show you some of the first steps…in order for you to get in and set up Ettercap.…The key thing is, you're gonna set yourself up…in the stream of traffic in order to do this ARP poison.…And you're gonna be set up in a Local Area Network.…We'll start with opening a terminal,…and here we're gonna go first into Leafpad,…and once we get into the configuration…just a couple of changes that we want to make.…

And I'll change this now to zero.…